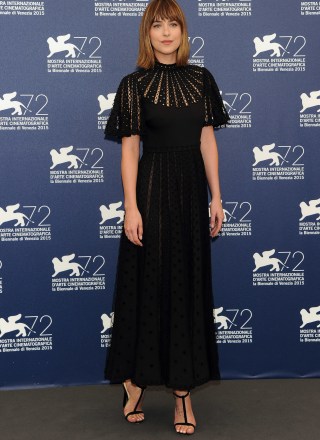 Dakota Johnson is a third-generation performer. She is the daughter of Melanie Griffith and Don Johnson, the stepdaughter of Antonio Banderas since 1996 and the granddaughter of Tippi Hedren. She made her film debut when she was only 10 in Banderas' directorial debut "Crazy In Alabama", in which she and her half-sister played daughters of their real-life mom. She was chosen to hand out awards as Miss Golden Globe in 2006. After a 2007 stint in a teen-oriented rehab for substance/alcohol abuse and a successful run as an IMG-repped model for brands including Mango Jeans and Oliver Peoples, she turned her attention back to acting and quickly landed a small role as Justin Timberlake's love interest in Oscar-nominated "The Social Network". Then came mostly a slew of supporting parts in films like "21 Jump Street", "The Five-Year Engagement" and "Need For Speed". She got her first taste for headlining projects on the short-lived 2012-2013 Fox sitcom "Ben & Kate". We get the feeling that she won't play second fiddle that much longer as she is taking on Anastasia Steele in the much-anticipated 2014 film adaptation of the erotic bestseller "Fifty Shades of Grey." In real life, she's only had bedroom eyes for Jordan Masterson, the younger half-brother of actors Danny and Christopher Masterson, for the last year.