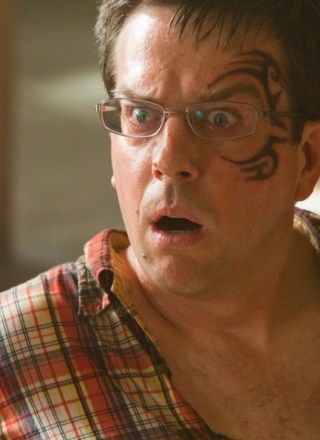 Unlike his character on "The Office," Ed Helms did not attend Cornell. He went to Oberlin, first as a geology major and then as a film theory and technology student.  However, like Andy Bernard, he was a proud member of an a capella group while a coed. He also studied improv and after graduating in 1996, he took his comedic talents to New York City. He earned his keep as a video editor while doing stand-up with Upright Citizens Brigade and voiceover work. In 2002, he began a four-year reporting stint with Jon Stewart's "Daily Show." After moving on with "Arrested Development" and "Sunday Pants," he was recruited by "The Office" in 2006. Despite becoming a marquee name with "The Hangover" trilogy, he stayed on as The Nard Dog until the show's final 2013 season.  The banjo player, who has recently amped up touring, has also been seen in a variety of blockbusters like "Night At The Museum, "Evan Almighty" and "Walk Hard" while earning critical acclaim in smaller films like "Cedar Rapids" and "Jeff, Who Lives At Home." Rumors broke out in summer 2014 that he had secretly wed his long-time girlfriend.