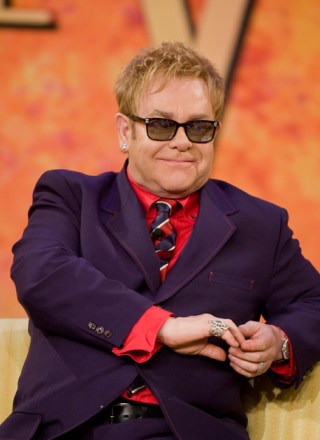 In the five decades since he began his career, Elton Hercules John has lived up to his mythical middle name. He's had 56 Top 40 singles, holds the record for the biggest selling single of all time ("Candle In The Wind"), sold more than 250 million records worldwide, played more than 3,500 concerts, achieved 25 platinum albums, and won a multitude of awards and honors including knighthood in 1998 and a Kennedy Center Honor in 2004. The piano protégé played by ear when he was 3 and attended the Royal Academy Of Music on scholarship from 1959-64. He gigged with bands, The Corvettes and Bluesology, before being united with writing partner Bernie Taupin by a 1967 classified. They correspond by mail and have never written a song in the same room. He became an overnight sensation in 1970 with the release of his self-titled debut and his first LA concert and is known for perennial favorites "Your Song," "Bennie And The Jets," "Saturday Night's Alright For Fighting, "Goodbye Yellow Brick Road," "Rocket Man" and "I'm Still Standing."  When he isn't busy winning an Oscar for "The Lion King" (1995), a Tony for "Aida" (2000), five Grammys, or being inducted into the Rock 'n Roll Hall of Fame (1994), he heads the Elton John AIDS Foundation, co-produces films like "Gnomeo & Juliet" with partner David Furnish (union legalized in 2005), and raises his sons Zachary (2010) and Elijah (2013), both born through surrogacy.