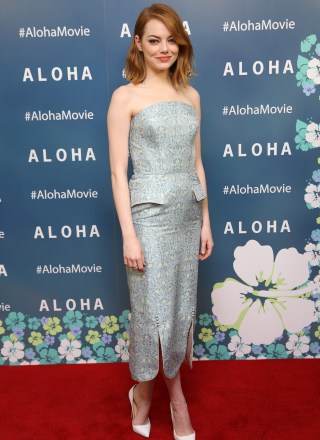 Emma Stone has wanted to be the next Steve Martin since she was 4.  To that end, she regularly performed improv at the local Valley Youth Theatre and convinced her parents to homeschool her at 12 to free up time for auditions with a foam-board presentation. By 15, she knew she could only get so far in Arizona so she made a PowerPoint to persuade her parents to move to LA. They agreed and she spent a couple of years auditioning unsuccessfully for every Disney Channel series and sitcom daughter while working at a dog bakery. By 2006, she had a few TV projects under her belt ("Malcolm In The Middle," "Medium") and losing the "Heroes" cheerleader roll to Hayden Panettiere made her serendipitously available for her big break, "Superbad," which also turned the natural blonde into a crushable ginger and Hollywood's go-to sassy ingenue. On its heels, she scored "The Rocker," "House Bunny," "Zombieland," and her first lead gig in "Easy A" (2010). That job led the recovering "Farmville" addict to fulfilling her biggest dream of hosting "Saturday Night Live." She had a banner year in 2011 starring in three consecutive mega-hits ("Friends with Benefits," "Crazy, Stupid, Love," and "The Help"), becoming a face of Revlon, and being cast as Gwen Stacy in The Spider-Man reboots. It wasn't long before this ex of Kieran Culkin and Teddy Geiger had fallen for her onscreen superhero beau, Andrew Garfield, in real life.