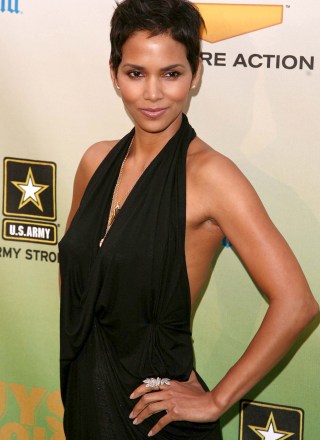 Share Tweet Pin Email
Halle Berry's high school experience as cheer captain, prom queen, newspaper editor and class president at an all-white school was an early indicator of the success she'd attain in the public eye. First, Miss Ohio, who suffers from Type 1 diabetes, stormed the pageant world, placing second in Miss USA and sixth in Miss World. By 1989, she moved onto the small screen with "Who's The Boss" spinoff "Living Dolls." Other notable TV gigs include a season on "Knot's Landing," "Their Eyes Were Watching God" and playing "Introducing Dorothy Dandridge," which earned her a Golden Globe and an Emmy. Playing a drug addict in 1991's "Jungle Fever" opened the door to a genre-spanning fruitful movie career ("The Last Boy Scout," "Swordfish," "Losing Isaiah," "Boomerang," "Bulworth"). The bandage dress babe has been a Bond girl and two legendary comic book characters (Catwoman and Storm), but her most rewarding professional moment was probably when the Revlon spokesperson became the first African-American to win Best Actress for 2002's "Monster's Ball." It's probably only topped by the births of daughter Nahla in 2008 and son Maceo-Robert in 2013. The only category the "Extant" lead has seemed unable to master has been love as she's twice divorced (baseball player David Justice and singer/sex addict Eric Benet) and split with Nahla's dad, model Gabriel Aubry, after four years. She's hoping third time's a charm as she married her son's French actor father Oliver Martinez in 2013.