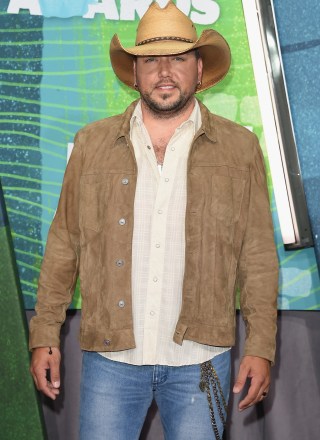 Jason Aldean grew up splitting time between his divorced parents in Georgia and Florida. His father taught him to play guitar, a skill he put to use when he joined a band after high school and gigged around the South's college towns. A publishing deal with Warner-Chappell sent him to Nashville, but it would take three signing to three different labels before he released his first Top 10 hit, "Hicktown," in 2005. His self-titled debut also spawned his first No. 1, "Why." Albums Relentless, Wide Open, My Kinda Party (certified triple platinum) followed in 2007, 2009, 2010 and 2012. He has had 11 more singles reach No. 1 on the country charts including a duet with Kelly Clarkson called "Don't You Wanna Stay," "Night Train," "Fly Over States" and "The Only Way I Know," a collaboration with Eric Church and Luke Bryan.  He married his high-school sweetheart Jessica Ussery in 2001 and they have two daughters, Kendyl and Keeley. But in 2013, after he was seen kissing "American Idol" alum Brittany Kerr in an LA bar a few months earlier, the couple split. He and Kerr announced their engagement in September 2014.