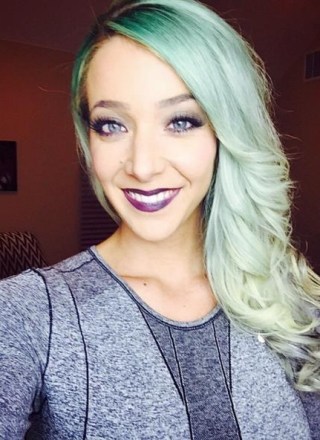 Share Tweet Pin Email
Jenna Marbles (real name: Jenna Mourey) is one of the first big YouTube stars. She's known for her comedic videos that often feature her two dogs, Mr. Marbles and Kermit. Before hitting it big, Jenna, who was born on Sept. 15, 1986, and raised in upstate New York, earned an undergraduate degree in psychology followed by a master's degree in sport psychology and counseling from Boston University. Like any college grad trying to figure out life after school, Jenna worked every job available — from bartending to nightclub go-go dancing — so she could pay rent and afford groceries. It's jobs like these that inspired her to start making her hilarious YouTube videos. She blew up when she posted one titled "How to trick people into thinking you're good looking," which remains her most popular clip to date with almost 64 million views. These days, she has 16 million followers on YouTube, 4 million on Twitter and 3.8 million on Instagram. When she's not posting on social media, Jenna is attending events like VidCon or hosting her Sirius XM weekly pop countdown show, "YouTube 15." She even has her own wax figure at Madame Tussauds in New York City, making her the first social media celebrity to be immortalized at the famed tourist destination. Let's just say she's not struggling to pay her rent any more.