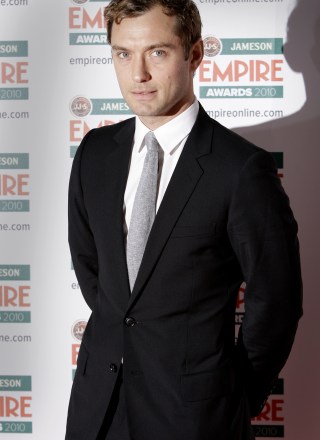 Share Tweet Pin Email
As part of a joke referencing his Sexiest Man Alive Title and six theatrical releases of 2004, host Chris Rock pondered at the 2005 Oscars ceremony: "Who is Jude Law?" Well, he's the son of schoolteachers named after the Thomas Hardy novel who spent his teen years enrolled in Britain's National Youth Music Theatre and eventually dropped out of high school to work on the soap Families. He bared all on Broadway in 1995's Indiscretions, which earned him a Tony nomination. On his first big film break, 1994's Shopping, he met Sadie Frost who wed the Road to Perdition villain in 1997 and gave birth to son Rafferty in 1996, daughter Iris in 200 and son Rudy in 2002. Law was nominated for two Oscars for his supporting role in 2000's The Talented Mr. Ripley and for the lead in 2004's Cold Mountain. While remaking Alfie and apparently falling for his costar Sienna Miller, Law finalized his messy divorce with Frost in 2003. By December of the following year, Law proposed to Miller but their happiness was short-lived as his affair with his children's nanny Daisy Wright became public knowledge in the summer of 2005. It iwasn't the last time Law's talent was overshadowed by controversy. In 2007, he was arrested (and later cleared) for allegedly scuffling with a photographer and in 2009, while he was earning rave reviews for doing Hamlet on Broadway, 24-year-old model Samantha Burke, whom he briefly dated while filming Sherlock Holmes, delivered his daughter Sophia. That same year, he and Miller gave love another try, but the rekindling only lasted until February 2011.