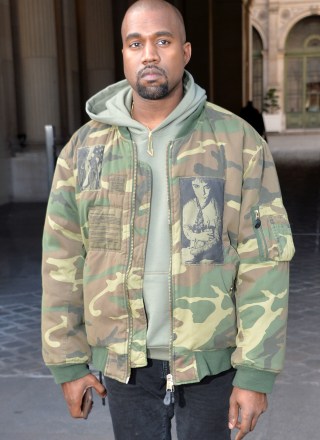 Share Tweet Pin Email
Outspoken rapper Kanye West sometimes takes his name, which means "the only one" in Swahili, too seriously, but he's got skills to back up the bravado. After dropping out of Chicago State in 1996, West churned out hit singles for Common, Ludacris and Cam'Ron which caught the attention of Jay-Z who hired him to produce several tracks on The Blueprint. While recovering from a 2002 car crash with his jaw wired shut, he penned and recorded "Through The Wire," which prompted Roc-A-Fella to greenlight his first album, The College Dropout. The 2004 disc made him the most nominated artist at the 47th Grammy Awards with 10 nods and three wins. He took home three more for 2005's Late Registration, another for 2007's Graduation and four more at the 2011 ceremony. But he never seems satisfied with the kudos and his impulsive reactions often land him in hot water like when he stormed out of the AMAs after losing Best New Artist, accused George Bush of not caring about black people at a live Hurricane Katrina benefit, rushed the 2006 MTV Europe Music Awards stage after losing and shouted a profanity-laced tirade, or interrupted Taylor Swift's acceptance speech at the 2009 MTV VMAs to sing Beyonce's praises. Previously linked to Amber Rose and engaged to Alexis Phifer from 2006-08, West started dating Kim Kardashian who he wooed in "Theraflu." Their daughter West was born in June 2013 and he put a ring on it in May 2014.