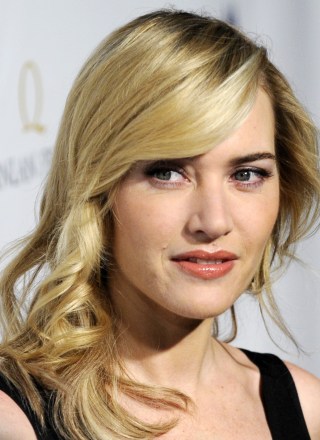 Share Tweet Pin Email
Making almost as many headlines for her killer curves as she does for her acting prowess, Kate Winslet is the youngest actress to score six Academy Award nominations. Her role in the 1995 adaptation of Sense and Sensibility gave her the first nod and the most recent one, which turned into her first win, was thanks to 2009's The Reader, in which she played a troubled woman with a Nazi past. Although she wouldn't become a true household name until she played the lead in the record-breaking blockbuster Titanic, the granddaughter of theater owners had been a working actress since she got paid to pitch Sugar Puffs cereal at 11. Her love life is almost as varied as her resume which includes standout indies Iris and Eternal Sunshine of The Spotless Mind, fluffy studio fare like The Holiday, dirty comedies like Extras and Movie 43 and Emmy-winning TV miniseries Mildred Pierce. She dated actors Stephen Tredre, whom she met on set of '90s sci-fi show Dark Season and spent five years, and Rufus Sewell for three months. She married Jim Threapleton, an assistant director on Hideous Kinky, in 1998 and gave birth to their daughter Mia in Oct. 2000. But by 2001, they'd announced their separation and Winslet moved on with director Sam Mendes. They married in May 2003 before welcoming son Joe the following December, collaborated on 2008's Revolutionary Road (which nabbed her a Golden Globe) and divorced in 2010. The St. John spokesmodel moved on with British model Louis Dowler and eventually married Ned RocknRoll, the nephew of Virgin billionaire Richard Branson, in 2012 after dating for a little more than a year.