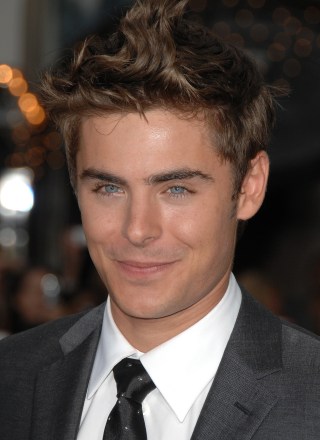 The floppy hair, the twinkling blue eyes, the all-American boy style and the ability to hit high notes throughout the High School Musical franchise and Hairspray earned Zac Efron, who deferred his acceptance to USC after being picked to be Troy Bolton, a place in the teen heartthrob hall of fame. Before the fan mail and fame, came the hustle. He did local plays and singing lessons and in high school he drove to L.A. three days a week for auditions. He landed a few in the early 2000s (Firefly, ER, C.S.I., and The Guardian) before becoming a series regular on short-lived Summerland in 2004. HSM debuted in 2006 to record-breaking viewership and soundtrack sales and won him a Teen Choice Award and a girlfriend in costar Vanessa Hudgens. (They dated until 2010.) HSM 2 and 3 followed in 2007 and 2008 before Zac successfully graduated to adult star with indie flick Me and Orson Welles, a People Magazine Hot Bodies cover and a slew of dramas and comedies (17 Again, Neighbors, The Lucky One). Along the way, his meteoric rise has hit a few bumps. He quietly spent a stint in rehab in 2013 and got in a fight with a homeless man I 2014 in LA. His PDA-filled 2014 summer fling with Michelle Rodriguez went from sizzle to fizzle in a little over a month. Things are looking up as he is currently filming Neighbors 2 and just celebrated his year anniversary with marketing exec turned model Sami Miro.