Taylor Swift has been in a few infamous celebrity spats over the years, but that doesn't mean everything you've read about the superstar fighting with her fellow stars is true. In fact, a lot of it is made-up. Below, Gossip Cop looks at five wrong feud rumors involving Swift. 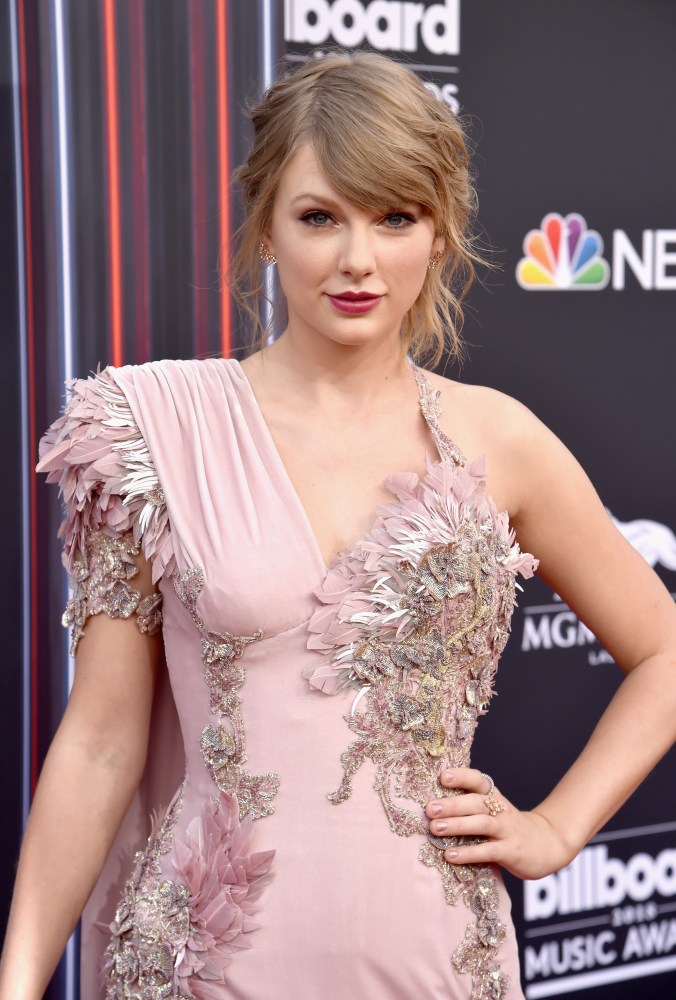 In 2015, it was alleged Swift was feuding with Sarah Palin, of all people. Using a photo of the pair at "SNL 40," HollywoodLife claimed Swift was "rolling her eyes and looking extremely unhappy" while seated next to the former vice presidential candidate. This was an assumption on the site's part, one that ignored that Steven Spielberg was seated on Swift's other side. How did the blog know she wasn't "rolling her eyes" over him? Actually, as Gossip Cop pointed out, she wasn't rolling her eyes at all. She was looking up at one of the monitors that "Saturday Night Live" has stationed throughout the audience section. It isn't always possible to see the sketches unfold, depending on one's point of view, so the monitors ensure that no one in the crowd misses anything. In this particular instance, Dakota Johnson was doing a bit while standing behind Swift and Palin, so Swift was looking up at the monitor to see what was going on. But the website cropped the original photo of Palin and Swift to remove Johnson from the frame, thereby eliminating the picture's context.

The following year, OK! ran a story in the fall of 2016 that claimed Swift and ex-boyfriend Tom Hiddleston were in a "heated ongoing feud." The tabloid maintained they were "no longer playing nice following their very public break-up" and now had "bad blood between them." A so-called "insider" was even quoted as saying, "Tom won't stop dragging Taylor's name through the mud to anyone who will listen." Ironically, it was also alleged they had a "fake romance," which, as Gossip Cop noted, didn't make sense in the context of this narrative. If their relationship was just a "showmance," why would either of them care enough to badmouth the other? We were told the contentions were "nonsense," and a few months later we were proven right when Hiddleston defended Swift and called her an "amazing woman" in a GQ cover story. He added, "She's generous and kind and lovely, and we had the best time."

By the end of 2017, OK! wanted readers to believe Swift was feuding with her former "girl squad." The magazine insisted on its website that the songstress received "no love" on her birthday from any of her friends aside from Karlie Kloss. "Looks like Taylor is going to have to find some new A-list pals," claimed the magazine. The outlet even suggested Swift was on the outs with Gigi Hadid and Lily Aldridge. But Gossip Cop exposed the story as provably untrue, as both of them actually did publicly reach out to her. Aldridge dedicated an Instagram posted to Swift, writing in part, "We love you So So So So So Soooo MUCH!!!" And Hadid, while admitting she was traveling so she was unable to post in a timely manner, assured fans on Twitter, "u know she got the love irl." That's wasn't all. A slew of other famous friends also shared messages, and Elle actually rounded up all of Swift's birthday posts. The only world in which she got "no love from her girl squad on her birthday" was apparently some alternate reality.

In May of 2018, after Swift and on-and-off rival Katy Perry seemed to patch things up, Heat tried to reignite a feud between them. The publication peddled an article contending Perry was "furious" with Swift for "leaking her private peace offering" on social media. "This is so typical of Taylor, and Katy is already regretting it," an untraceable "insider" was quoted as saying. Other quotes featured in the story, however, were plagiarized from The Sun, which also alleged Perry was upset that Swift had shared her handwritten apology letter. But neither the tabloid nor the newspaper was correct. E! Online reported that Perry was "relieved" Swift accepted the olive branch, and that she "wasn't upset at all" with the note being shared publicly. In fact, Perry was said to be "happy that Taylor was accepting and took the time to post about it." A rep for Perry even confirmed to Gossip Cop that this information was accurate.

Our last example, which is also from May, examines how HollywoodLife has spent years manufacturing stories about Swift and Selena Gomez feuding due to the latter's relationship with Justin Bieber. After Gomez gave a speech while on stage with Swift, gushing, "This person has never ever judged a single decision I've made," the site pretended to have a "source" who knew, "Taylor was literally the only one of Selena's pals who never said anything bad about her getting back with Justin. She's always just been there for Selena as a supportive and loving friend, no matter what." The problem was that this contradicted countless posts from previous years, in which the blog insisted Swift and Gomez were in an "icy feud," and that Swift had even given her an ultimatum: "Dump Justin Bieber or our friendship's over." Gossip Cop actually corrected a lot of those tall tales when they were originally published, so it was galling to see the website suddenly flip-flopping and acknowledging that Gomez and Swift had remained friends all along, just as we had said.

There is no denying Swift has gotten into tiffs over the years, and not just with Perry. But unfortunately, what some fail to realize is that many "celebrity feuds" are just concocted by the gossip media. Not everyone in Hollywood is friends with each other, but no one is in constant battles, either. Remember that the next time the tabloids pit two stars against each other.

Kourtney Kardashian Dumped Younes Bendjima To Get Back Together With Scott Disick?