Carrie Underwood and Mike Fisher's marriage did not need to be "saved," despite a new report by a magazine with a history of publishing false claims about the happy spouses. What's really happening is a particular tabloid is trying to cover up its years of untrue stories about the singer and the former NHL player being on the verge of a divorce. 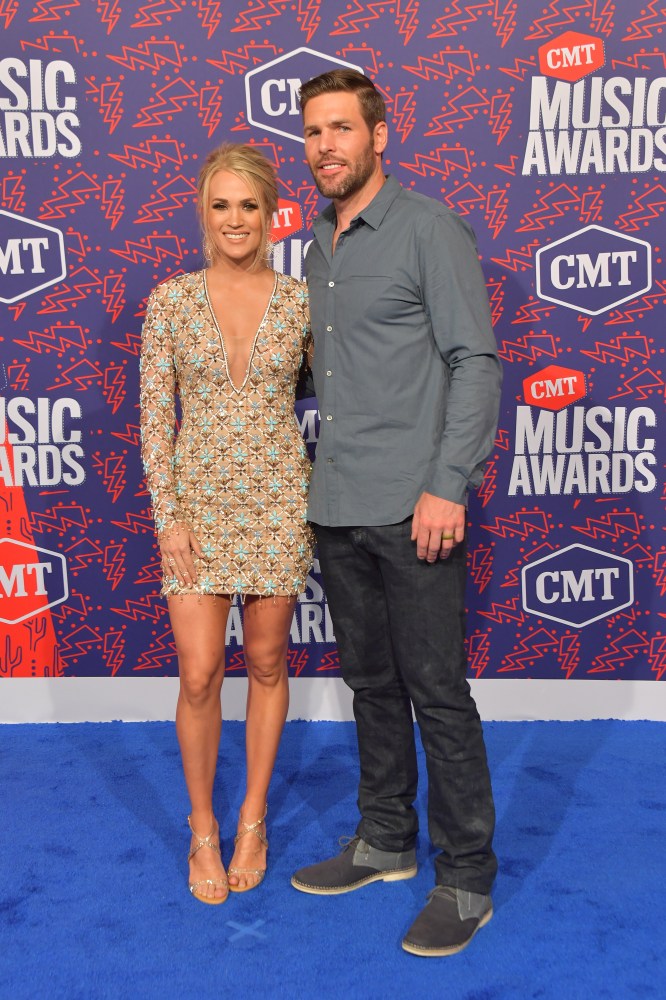 Earlier this month, Fisher was filmed kissing his wife at the CMT Music Awards before she made her way to the stage to collect the award for female video of the year. Underwood gave her husband a shoutout during her speech and later posted a photo of the two in Instagram. It's clear the couple's marriage is going strong, but according to In Touch, they had been struggling up until recently.

"They were hanging by a thread," a supposed source tells the magazine, adding that Underwood and Fisher "nearly split up" before celebrating their ninth wedding anniversary last July. "They had been leading separate lives," says the alleged insider, who further contends that differing interests and schedules were taking a toll on their marriage.

The seemingly phony tipster goes on to say that Underwood and Fisher managed to save their relationship through couples counseling, "along with their shared [Christian] faith." The so-called "source" adds, "And they're both making an effort to communicate – thats what they've learned in counseling."

In reality, In Touch is trying to cover its tracks after spending a long time wrongly alleging the spouses were divorcing. Gossip Cop, however, has a very good memory and even better archives. So, let's take a stroll down memory lane of some of the tabloid's past flub.

Among the many examples we found was a February 2017 cover story insisting Underwood and Fisher were headed for divorce as a result of him coming out retirement, albeit briefly, to rejoin the NHL's Nashville Predators. While the outlet's unnamed "source" maintained "time [was] running out" for the marriage, Fisher revealed on ESPN that it was actually his wife who encouraged him to play professional hockey again. At the time, Underwood also tweeted, "Fish is back! So proud of you, baby!"

About two weeks after that falsehood, the magazine alleged Fisher had broken his silence about his "divorce" from Underwood. What really happened was that the deeply devout hockey star posted on Instagram a biblical verse that reads, in part, "Search me, God, and know my heart; test me and know my anxious thoughts." But after a fan misinterpreted Fisher's post and commented, "Praying for you and Carrie… There are always bumps in the road," the magazine concocted it phony premise. Fisher, however, corrected the fan and debunked the tabloid by responding, "We've never been better."

Proving the outlet and its supposed sources know little to nothing about the singer, in August 2018 the magazine ran a cover story that declared Underwood was pregnant with twins girls. In reality, Underwood gave birth in January 2019 to one baby, a boy she and Fisher named Jacob. Much like the current article, the tabloid tried in late 2018 to cover its mistakes with yet another bogus cover story about how after a "rocky patch," Underwood was trying to save her and Fisher's marriage from divorce, but that too was nothing more than a fabrication.