One of this week's tabloids claims Catherine Zeta-Jones is divorcing Michael Douglas over the sexual misconduct allegations made against him in January 2018. The out-of-date story lacks logic, and it's also untrue. Gossip Cop can clear up the situation. 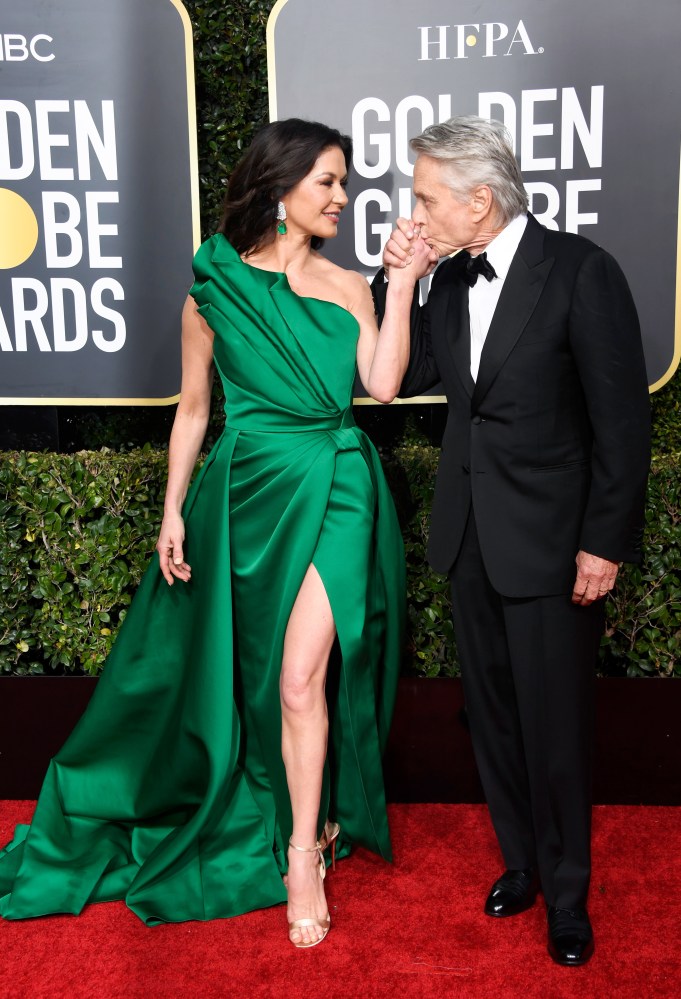 Nearly one year ago, a former employee at Douglas's production company claimed the actor sexually harassed her while she was working for him in the 1980s. Douglas vehemently denied the accusation, but according to Star, his wife of 18 years is horrified and humiliated by the situation. A supposed source tells the magazine, "She always warned him that if anything more emerged about his philandering she would leave. Now it looks as though she's following through with her word… She's quietly told her lawyers to prepare the divorce papers."

The alleged insider further contends that Zeta-Jones went so far as to tell her husband that she doesn't love him anymore. "Catherine punched below the belt as payback for all the stress and anxiety he's caused her," adds the questionable tipster. "Deep down she must care, but she said she's not in love with him anymore and she's ready to move on." The seemingly phony source concludes, "Michael was shocked and begged her to reconsider. She was having none of it."

The unreliable tabloid fails to explain why Zeta-Jones decided to end her marriage over sexual misconduct allegations that came out a year ago. In addition to the article making little sense, it's also based on claims from an anonymous and untraceable "insider." Gossip Cop, however, reached out to the actress's rep, who tells us on the record that the story is "complete nonsense." A spokesperson for Douglas also denies the report.

It's worth noting, Zeta-Jones already addressed the sexual misconduct allegations against her husband. In a November 2018 interview with The Times U.K., the actress said she was "profoundly devastated" by the accusations, adding, "This woman came out of nowhere and accused my husband. I had a very big conversation with him, with the kids in the room, and said, 'Do you understand if more comes out …'" Zeta-Jones further noted that Douglas assured her the claims against him were false, and did so "by telling us that there is no story here and that time will tell. And, of course, it did." She added, "There was nothing to back it up at all. For any accusation that comes out that isn't backed up, that knocks the movement back 20 years."

Meanwhile, Zeta-Jones and Douglas just celebrated New Year's Eve in the Caribbean with their kids. Zeta-Jones even shared an Instagram video of her and the actor sharing a kiss in front of a fireworks display. The actress also shared an Instagram photo of the two kissing at Douglas's Hollywood Walk of Fame ceremony, along with the caption, "My forever New Years kiss." The spouses are still happily married, and the tabloid's new article claiming otherwise is both false and outdated.