Ellen DeGeneres did not "dump" Portia de Rossi, despite a new tabloid cover story. Gossip Cop can debunk it. While this report claims a "$400 million divorce" is on the horizon, there is plenty of evidence the couple is still happily together. 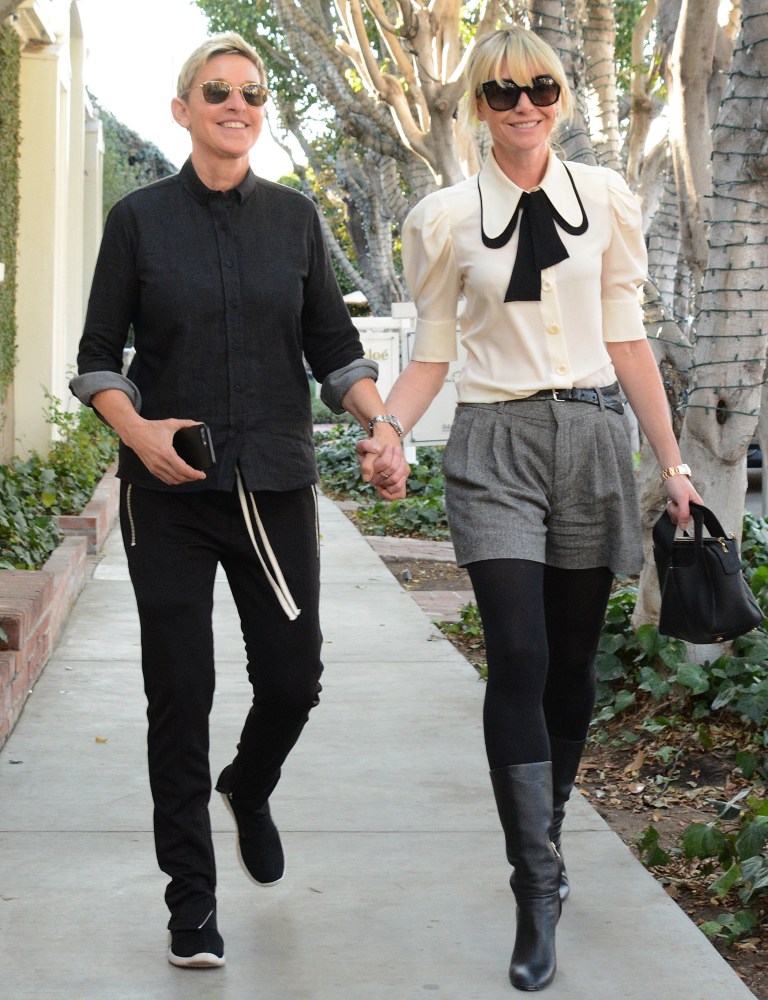 The National Enquirer contends in its new issue, "Fed-up Ellen DeGeneres has fled the marital home she shares with Portia de Rossi, setting the stage for a blockbuster $400 million divorce." It's specifically claimed they "tangled in a fight to end all fights that climaxed with Ellen ripping off her wedding ring and moving out." A so-called "insider" is quoted as saying, "It's all very shady and ominous. Ellen went to great lengths to keep the news from their closest friends to avoid being asked questions." One has to wonder then how this unnamed and untraceable "insider" has any insight.

This supposed snitch goes on to claim to the magazine, without evidence, "[Ellen] and Portia were fighting more and more. Eventually, what normally would have been a routine back-and-forth turned nasty." It allegedly led DeGeneres to "storm out" and move. Yet it's never said just what the pair were "fighting" about, or even when the purported "brutal blowup" took place. Instead, an anonymous "source" vaguely claims DeGeneres and de Rossi now "spend less and less time together," have been "living separate lives," and "hardly say a word to each other all day."

But the outlet admittedly has no proof that the couple is actually calling it quits. Rather, the publication predicts, "If they do announce a divorce, it promises to be one of the most expensive in Hollywood history." Of course, the tabloid has spent years claiming, without evidence, that the stars are divorcing. Just a month ago, the magazine insisted DeGeneres and de Rossi were having a "marriage crisis," and then days later contradictorily said they were happily preparing for their upcoming anniversary.

Most significant right now is that while the magazine is maintaining they aren't spending time together, DeGeneres and de Rossi just took a romantic trip to Africa, which they both documented on social media. Only three days ago, de Rossi posted on Instagram a picture of her wife on the vacation with the caption, "Just because she's beautiful @theellenshow." Among the recent snapshots on DeGeneres' Instagram is a photo of her with her arms around de Rossi. She wrote, "I love this photo."

Conclusion: The National Enquirer has been using anonymous "sources" and "insiders" for years to falsely claim DeGeneres and de Rossi are breaking up. This latest issue refers to the "fight to end all fights," yet never says what it was about or when it took place, and doesn't provide any proof to substantiate the contention that DeGeneres subsequently moved out. Furthermore, contrary to the allegations about the couple having "separate lives" and not spending time together, they just returned from a trip to Africa. It is readily apparent that DeGeneres has not "dumped" de Rossi. Additionally, a mutual friend of ours and DeGeneres also dismissed the cover story, and couldn't believe the tabloid even published it.

Jennifer Aniston did NOT "confront" Emma Stone over Justin Theroux, despite report

Kanye West NOT "touch feelt" with Candace Owens, despite claim