A new story that claims George Clooney and Amal Clooney are just putting on a "happy face" to hide their "marriage troubles" is made-up. Gossip Cop can bust this report. The truth is the couple remains in love and committed to one another, and are not getting a divorce. 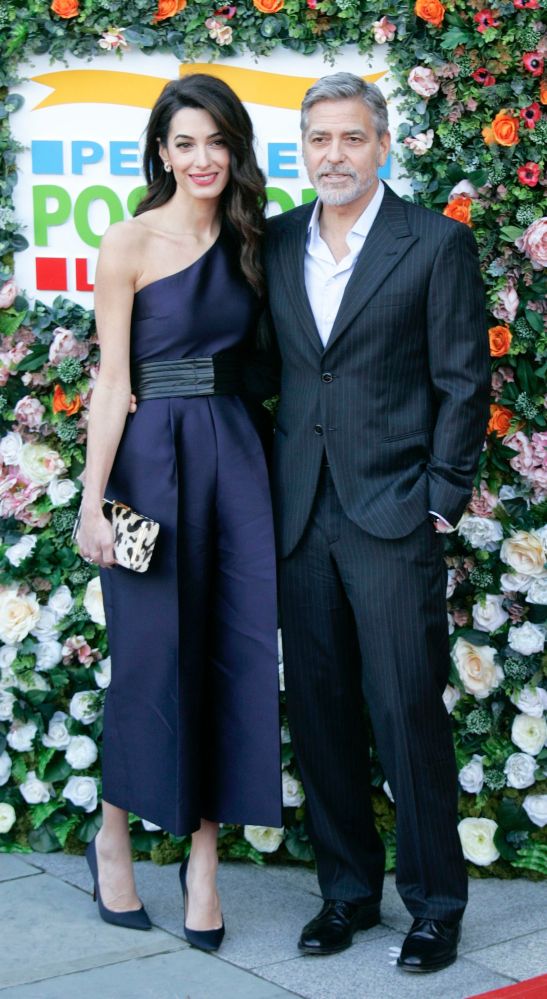 RadarOnline begins its latest inaccurate article by noting how the Clooneys were "all smiles" when they received an award in Scotland on Thursday for their humanitarian work. Next, the outlet mentions how two nights before that "they were at the Buckingham Palace, eating dinner with Prince Harry." In actuality, as widely reported, Amal and George were at Buckingham Palace for an event with Prince Charles, not his son Harry. But that's hardly the site's biggest mistake.

The often debunked blog's premise about the couple having "marriage troubles" is its most glaring error. Bizarrely, the website touts how back in April 2017 it maintained the Clooneys' marriage deteriorated to a point where George and Amal were "sleeping in separate bedrooms. But, as Gossip Cop rightly noted back then, that was a lie.

Then, the blog buries itself deeper by gloating how it has contended a number of times that Amal and George are "in the midst of a nasty divorce battle." In one section of the article, the outlet oddly reminds its readers how this January, along with its sister publication, the National Enquirer, it (wrongly) asserted Amal and George were getting a divorce, and that she had moved out of their house with their twins, Ella and Alexander, and into a villa in Sardinia. That, too, was a lie.

And just a month ago, Gossip Cop corrected the same repeatedly discredited outlet when it insisted George and Amal shared a "romantic dinner" to work on their "marriage problems." The reality was the Clooneys had been photographed at the Sunset Tower Hotel in Los Angeles a few hours earlier, and so the blog used those pictures and opportunity to try to cover up its previous bogus claims about them divorcing. That tale about them patching up alleged marital issues over dinner was also a lie.

The truth seems to be of little concern to that website since it frequently publishes falsehoods about George and Amal getting divorced and preparing for a custody fight over their twins. If anything, the only "troubles" the human rights attorney and the actor have are with outlets like RadarOnline which routinely manufacture fictitious stories about them. Not only have Gossip Cop's impeccable sources assured us they're happily married, and the Clooneys themselves have openly gushed about one another, but there's also photographic evidence that their love and smiles are genuine.

In the image above, the couple can be seen holding hands and looking happy while entering McEwan Hall in Scotland, where they received their humanitarian award on Thursday. And, as previously referenced, Amal and George Clooney were the picture of happiness with Prince Charles on Tuesday when they attended a dinner at Buckingham Palace to celebrate the royal's Prince's Trust charity. The most current tale about the Clooneys just putting on a "happy face" to hide their supposed "marriage troubles" is 100 percent made-up.