Wonderwall.com caught up with the Brat Pack OG himself, Rob Lowe, when he appeared on Michaels' Busy Philipps-hosted crafting game show "The Make Off," which is part of the retail chain's #MakeItWithMichaels campaign. As part of the YouTube series, Busy challenged a diorama-phobic Rob to a diorama-making competition that will bring you back to your elementary school days. Rob spoke to us about what it's like to be friends with Busy, celebrating Easter at the Lowe residence and navigating life as a parent to his two adult sons, Matthew, 23, and John Owen, 21. Keep reading for the highlights — and find out how Rob stacked up against Busy in the video below!

Rob Lowe on what gives him PTSD:

"I am the most untalented person in the craft arena that has ever been born. Without a doubt. So I figured if Michaels can't help me, then nobody can. But as untalented as I am in crafting, I'm also unbelievably competitive, so I plan on taking Busy Philipps down! What I lack in talent I make up for in appreciation, so I love and value people who can make and cook beautiful things. And of course, I'm a writer and I can edit and I film. But when it comes to practical things, I'm a little handicapped. You put me in front of yarn and paper and glitter guns and I start to have PTSD."

On this season of Michaels' "The Make Off":

"This time around it's spring-related, for sure. I started looking for the Easter Bunny when I saw the set! In fact, I actually found a costume in the studio, so I'm excited about potentially interacting with the Easter Bunny because at the end of the day, I'm nothing more than an overgrown 7-year-old." 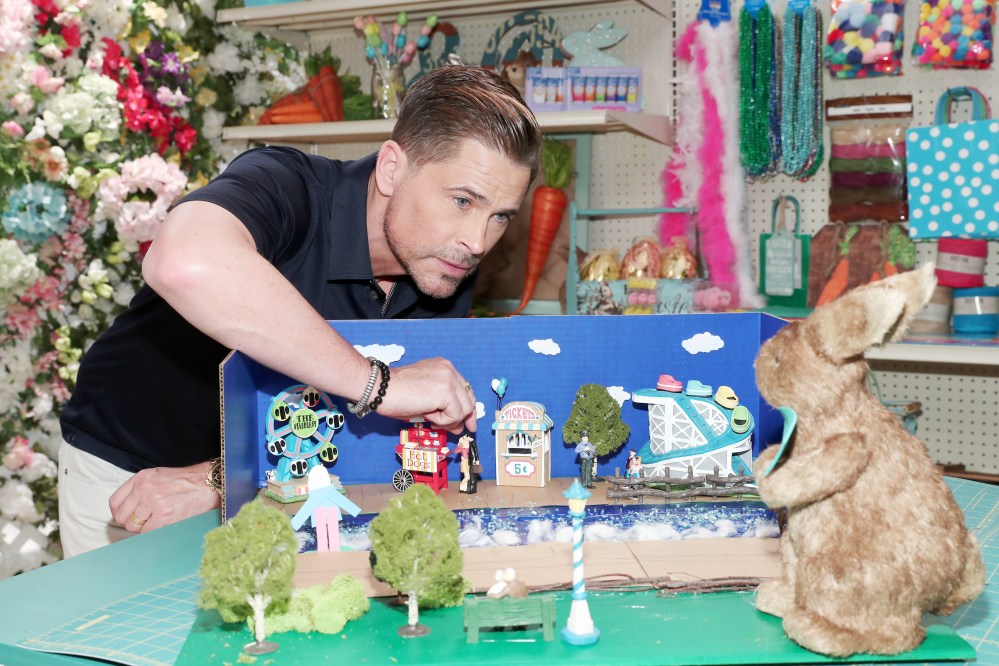 Getty Images for The Michaels Co

On holidays at the Lowe house:

"I go big on holidays! The two biggest craft-centric holidays for us are Halloween and Easter. During Halloween, we do a lot of pumpkin carving, which I actually can do — BIG TIME! And we always have an Easter egg designing competition. We live at the end of a long, long lane and there's no one else around us, but we still decorate our house like there's going to be neighborhood people driving by and actually seeing it."

On what gives him stomach issues:

"I had such a traumatic experience making dioramas in my own childhood that I think I stayed away from helping my own kids. I failed eighth grade woodshop because the final assignment was to make a wooden diorama, and I just couldn't do it. I had all these complex ideas about what I wanted to do — I could see it physically in my mind. I just had no actual ability to create it. Since then, I honestly get shallow breathing when I hear the word 'diorama.' The word 'diorama' gives me diarrhea."

"I have one kid who's a junior at Stanford and the other is in law school, so they're way beyond their Easter Bunny years. But what's so gratifying about being a parent to my sons now that they're older is helping them navigate the chapters of their lives — and this is a new one. It's about first jobs and apartments and serious girlfriends. It's the very first stage of adulthood. But like all kids, their level of willingness to listen is contingent on what day it is. But you try to guide them as best you can."

On which art form he would pursue:

"I would say painting. Painting is my favorite genre of art. I'm very cognizant of color because as someone who directs from time to time and produces a lot, you're faced with designing a world and a set. Color and light are a huge part of that."

On "The Make Off" host and friend Busy Philipps:

"We met a couple years ago for the first time, and I just fell in love with her. She's so funny and smart and has such a great attitude. She was there with her husband and kids and I was there with mine and we have so many mutual friends. She's one of those people where you go, 'I can't believe we've never met before.' But as much as I like her, she's going down today!"