Jennifer Lopez and Alex Rodriguez are not having a "wedding and a baby," contrary to a new tabloid cover story. Gossip Cop can exclusively debunk the report. The couple still isn't engaged, and all the claims are false. 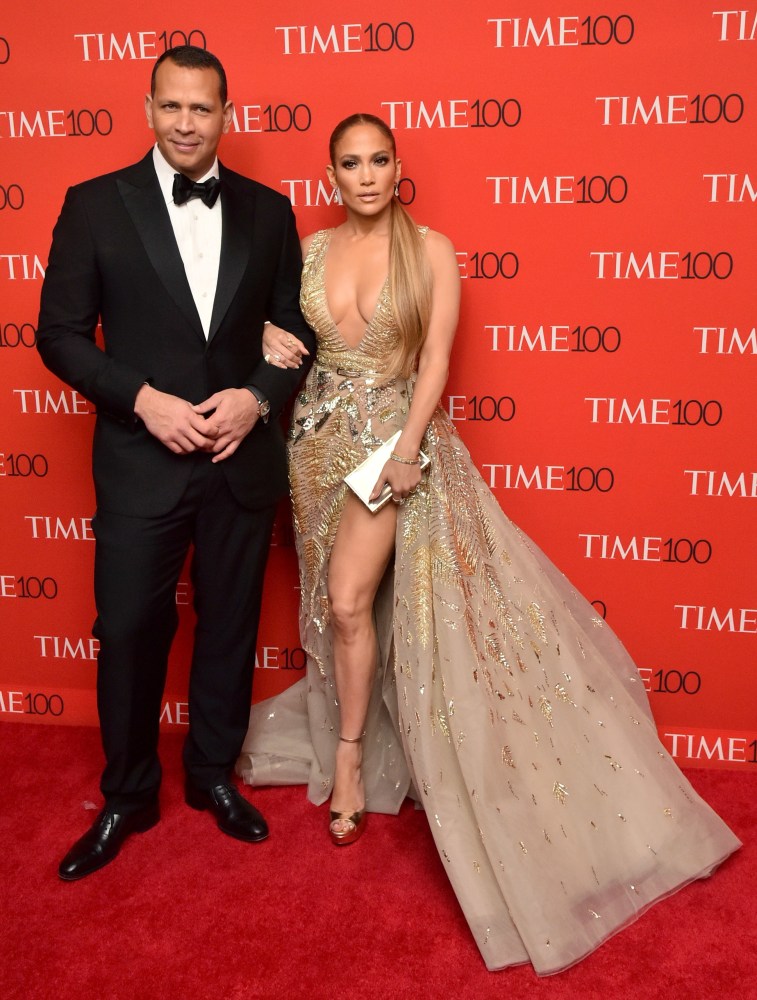 The cover of In Touch actually gives the impression that Lopez and Rodriguez have already wed with the teaser, "Inside Their $10 Million Ceremony." Another line states, "Flies 250 Friends And Family To Italy," with an arrow pointing to a photo of Rodriguez and Lopez in a boat. The caption reads, "Private Time Together Before The Big Day." This is a bait-and-switch, as inside the issue, the headline is, "J.Lo & Alex: We're Getting Married (And Having A Baby!)."

The article contends that the superstars recently got engaged during a vacation in Capri. "He popped the question on a romantic boat ride," a so-called "insider" is quoted as saying. "It was super romantic — he actually surprised her, which is very hard to do." It's even alleged Rodriguez "held on tightly so he wouldn't fall over" as he dropped to one knee. It should be noted, however, that paparazzi took pictures of Lopez and Rodriguez during their boat ride, and none of the shots show a proposal. The photos don't show the athlete on his knee, either.

Still, the magazine maintains Lopez and Rodriguez are now "excitedly planning their dream wedding," and fans should "expect more than 250 guests and a blowout celebration." Contends the untraceable source, "It's a no brainer that they'll have a massive wedding. No expense will be spared — it's going to be over the top, easily 10 million dollars." This, obviously, is from where the cover lines come.

And while the cover also lures fans with a teaser about "the 49-year-old superstar's 'miracle' pregnancy," this, too, is a bait-and-switch. The story itself doesn't say anything about Lopez currently being pregnant. Rather, the alleged tipster claims she and Rodriguez "want to have a baby," which would supposedly be a "miracle" given her age. In another deception, while the cover makes it seem like the couple is flying "friends and family to Italy" for the wedding, it's alleged in the article that the wedding will take place at a "tropical resort" in the Caribbean.

The piece is filled out with "other wedding details," and it's actually claimed they've "already begun writing their vows." So, why hasn't Lopez been spotted with an engagement ring? The outlet conveniently claims that while Rodriguez has already given her "starter" rings, he also has an "18-carat, emerald-cut diamond ring" that he's yet to give her. "He plans to surprise her with that any day now. Just to make it official," asserts the purported tipster.

What the publication doesn't tell readers is that it previously claimed Rodriguez had proposed to Lopez more than a year ago, in June of 2017, and that they were planning a $3 million wedding to take place at the Palace of Versailles. That narrative also came after the stars took a trip together, much like this one. History is also repeating when you consider that the tabloid's sister magazine, Life & Style, published an awfully similar "wedding & a baby" cover about Lopez and Rodriguez in March 2017 (see below).

Now that the storyline is back, a rep for Rodriguez tells Gossip Cop the claims are "ridiculous." And while a spokesperson for Lopez declined to comment, on background one of the singer's confidantes tells us the cover story is "wrong." And on top of all of the obvious problems with this article, it's worth remembering that Lopez has repeatedly said that she and Rodriguez are taking their time when it comes to their relationship. They are committed to one another, but they clearly don't need a wedding and a baby to show that.

Bradley Cooper Did NOT Warn Robert Pattinson Against Dating Suki Waterhouse, Despite Report

Nicole Kidman, Keith Urban Having Marriage Problems After He Lied About 'Mystery Woman'?