Are Kelly Clarkson and Ellen DeGeneres competing over respective talk shows? A report claims the singer's new project is sparking a feud with the comedienne. Gossip Cop, however, can reveal the truth. 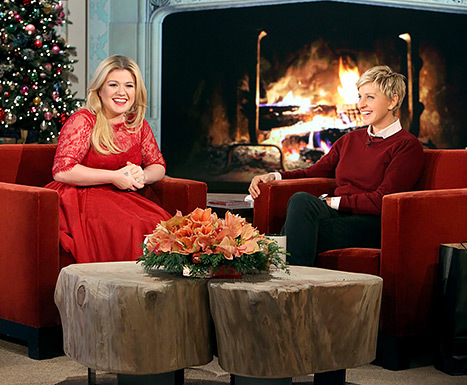 Earlier this month, Broadcasting & Cable reported Clarkson is shooting a talk show pilot with NBC Entertainment and NBCUniversal Television Distribution. The news came a few months after DeGeneres did a funny segment on "The Ellen Show" where Clarkson hosted "The Kelly Show." Now Life & Style is announcing in a headline, "Kelly Stabs Ellen In The Back," and begins its article by asking, "Did Ellen DeGeneres make a grave mistake when she let Kelly Clarkson come on her show and play host for a laugh?"

Noting that Clarkson is filming a pilot, the tabloid alleges the program "will likely go head-to-head with 'The Ellen DeGeneres Show.'" A so-called "insider" claims DeGeneres is "livid," contending, "She can't believe Kelly, who she considered a good friend, would stab her in the back like this." The magazine goes on to maintain Clarkson is "set to become" DeGeneres' "direct competitor — and could wind up dethroning her as the queen of daytime TV."

"Ellen plays well with others, until you cross the line. This is going to bring out her competitive side for sure," asserts the outlet's untraceable source, who adds, "Forget about the late-night talk show wars — the daytime battle has officially begun!" Actually, nothing has "officially begun."

Clarkson is filming a pilot for a potential show, and there is no network attached to the project, let alone a time slot. DeGeneres' show is syndicated, and while it airs on NBC in most markets, the time and station can vary. So the claims that Clarkson will be going "head-to-head" with DeGeneres as her "direct competitor" are premature and impossible to know at this point. In fact, when The Hollywood Reporter confirmed the original report about Clarkson doing a talk show, it was stressed, "The series could be sold to TV stations in syndication or air on another platform — or perhaps a combination of both."

Broadcasting & Cable said the same. In other words, there is nothing established at this point that makes Clarkson a "competitor" to DeGeneres, and any real "insider" would know that. Furthermore, the longtime TV host hasn't had a problem with new daytime shows joining her on to the airwaves. It was actually DeGeneres who produced Bethenny Frankel's talk show and helped her launch it.

And watching the full "Kelly Show" bit on "Ellen," it is readily apparent that Clarkson has DeGeneres' support. "She would be a great talk show host, and I want her to be a talk show host," DeGeneres told the audience. Life & Style is simply trying to manufacture a feud where one doesn't actually exist.

Kris Jenner Does NOT "Force" Kardashian Boyfriends To Sign "100-Page" NDAs, Despite Report