Are Kelly Ripa and Mark Consuelos renewing their vows with a $1 million wedding in the Hamptons? According to one of this week's celebrity magazines, the married couple of 23 years are going to says their "I dos" again before hundreds of guests in a lavish ceremony. Gossip Cop, however, looked into the report and we can exclusively debunk the romantic, yet untrue tale. 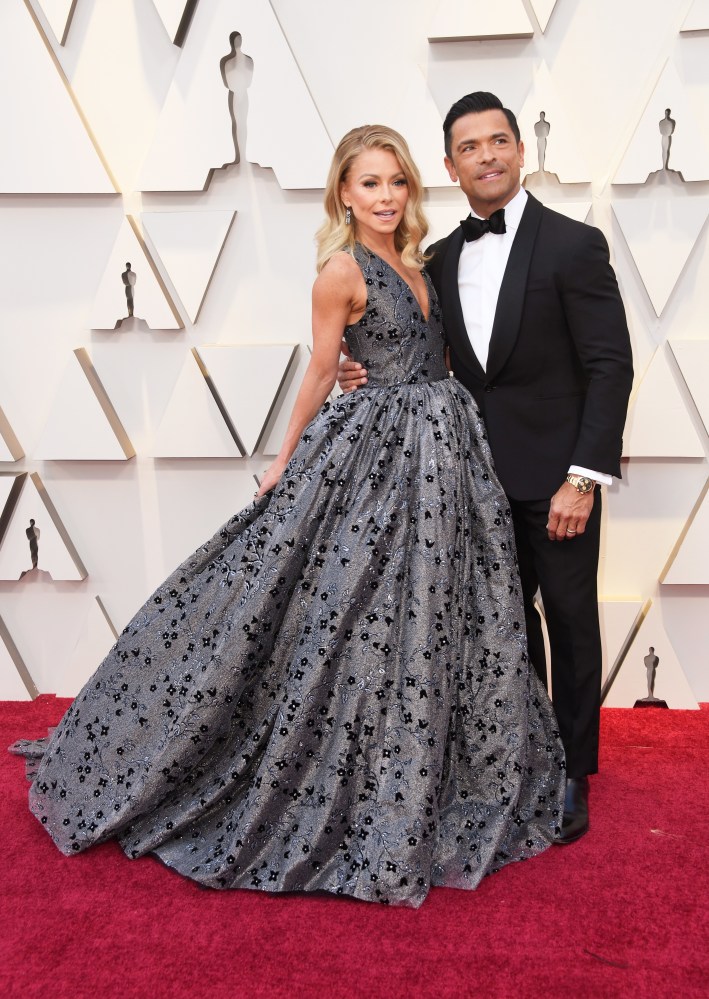 This week's issue of the Globe claims more than two decades after the morning show host and her actor husband eloped in Las Vegas, "Ripa's finally going to have a huge wedding with all the trimmings." To make its premise seem more credible, the supermarket tabloid quotes a so-called "insider" as saying, "[Ripa's] been begging Mark to marry her all over again and he's said yes." The supposed source further asserts, "She's really excited and coordinating all the details with a wedding planner."

"She's telling friends plans are in motion for a big splashy wedding and reception with all the bells and whistles at their home in the Hamptons," continues the tipster. Noting how Ripa and Consuelos, who stars on the CW show "Riverdale," can easily afford a $1 million wedding, the purported insider maintains there will be 500 guests at the nuptials, including Ryan Seacrest, Andy Cohen, and their former "All My Children" co-star Sarah Michelle Gellar." And the meal, contends the magazine, will be prepared by the couple's friend Gordon Ramsay.

Even though the outlet seems to know who's invited, how much the second wedding will cost, and where the over-the-top nuptials are slated to take place, it glaringly doesn't mention when the marriage ceremony is going to take place. Will it be over the next couple of months when Consuelos and Ripa will be spending more time at their Hamptons house? Will it be next May to coincide with their 24th anniversary? Or will it be sometime in between?

As of now, Gossip Cop has learned the couple will have a $1 million wedding in exactly one week from… never. There are no plans whatsoever for Ripa and Consuelos to renew their vows with a costly bash like that, and none of the alleged guests have been invited to any type of event that remotely resembles what the Globe has devoted a full page to. An actual source close to Ripa, who was not authorized to speak on the record, confirms to Gossip Cop that the tabloid's article is "totally false." Our impeccable insider even wonders "where they got this story from."

Gossip Cop previously corrected that same publication when it bizarrely and wrongly reported Ripa has a habit of eating her own fingernails. In that piece, it was alleged Seacrest routinely compares his co-host to flesh-eating character Hannibal Lecter from Silence Of The Lambs. A rep for "Live With Kelly And Ryan" called the story a "fabrication."

It's also interesting that the first person listed in the article as an attendee at the upcoming (nonexistent) wedding in the Hamptons is Ripa's co-host. Two years ago, for instance, the tabloid's sister publication Star ran a cover story that swore up and down that Ripa and Seacrest were in a "feud" on the set of "Live" because they couldn't stand each other. Reps for both hosts, as well as the show, assured Gossip Cop there was "no truth" to the report and, of course, they're still working happily side-by-side.

The magazine's other sister outlet, the National Enquirer, also ran a front page article insisting Ripa was quitting "Live" because she felt "betrayed" by Seacrest moving the show to Los Angeles. Naturally, the program never relocated out West, and Ripa hasn't left the show. Much like those falsehoods and many more, the latest tale about Ripa and Consuelos renewing their vows with a $1 million wedding has more in common with their old soap opera days than it does with reality.

Brad Pitt Dating Two Models, An Actress And One Of His Kids' Teachers?

Charlize Theron, Alexander Skarsgard Getting Married And Having Kids?