Meghan Markle is not pregnant, despite a new tabloid cover story that claims she and Prince Harry are expecting a baby just days before their wedding. Gossip Cop can bust this fabrication. It comes roughly six months after this same magazine peddled a similarly untrue report. 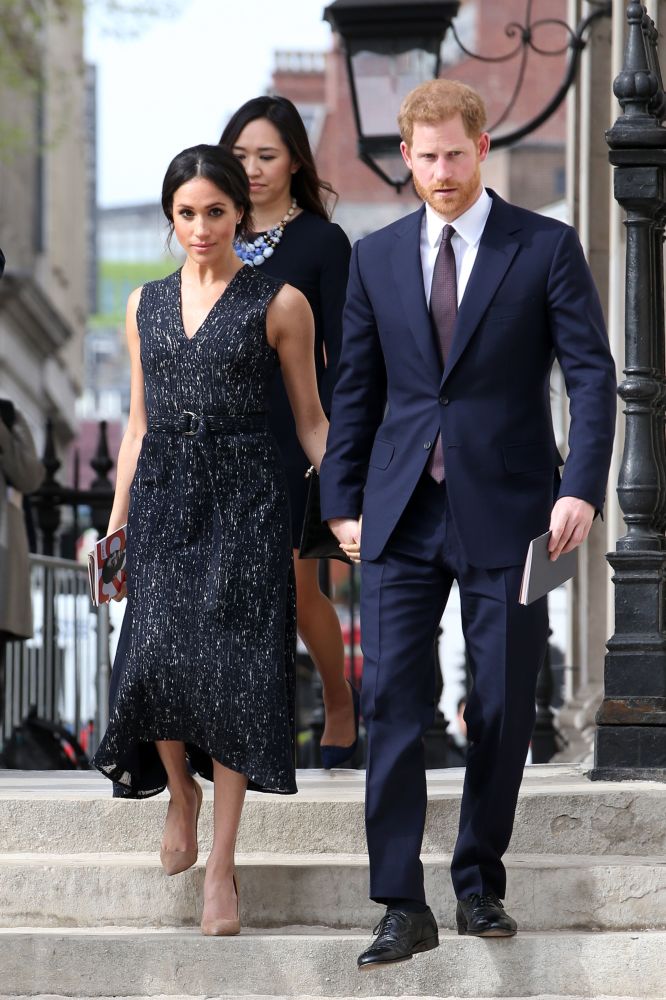 In November, right after their engagement was announced, In Touch falsely claimed Markle was pregnant. Touting a "palace bombshell," the outlet alleged she and Prince Harry had "fast-tracked" their marriage plans due to the purported pregnancy, and maintained Markle wanted to get married with a "small bump." At that time, however, it was already known the wedding would be held in May, and as we pointed out then, the "Suits" star wouldn't have a "small bump" six months later if she were actually pregnant. In addition, an impeccable Markle contact exclusively told Gossip Cop on background that she was "certainly not expecting."

Time has proven our debunking was correct. Markle was not pregnant then. But now with the nuptials just days away, the publication is trying to sell a similar storyline with a new cover that announces the bride-to-be is pregnant in a "wedding bombshell." According to the article, Markle and Prince Harry have been "actively trying to conceive," and "some of Meghan's closest friends believe" she is "already expecting a little prince or princess." A so-called "source" acknowledges that it's against royal tradition to become pregnant before marriage, but claims, "Harry's always been a rule-breaker and Meghan can feel her biological clock ticking, so they've already stopped using protection. They've been trying for a baby for a few months."

The magazine's alleged snitch contends the couple "didn't tell many people they were already trying for a baby before the wedding," but readers are supposed to believe they shared such intimate information with someone who then turned around and leaked their contraception practices, or lack thereof, to the gossip media. To add credence to its tale, the outlet cites an "insider," who claims Markle has been "nauseous" and sporting "glowing skin," while Prince Harry has been "spotted… affectionately touching her belly." The publication also claims the actress has been undergoing "top-secret, last-minute gown fittings to accommodate her changing waistline."

But the publication admits it doesn't know for sure if Markle is really pregnant, confessing, "If they are expecting, mum's the word." Further moving away from the contention that she's already expecting, the "source" alleges the soon-to-be-royal is concerned about conceiving naturally and has "looked into IVF as a backup plan." Amid that wishy-washiness, the tabloid claims Markle and Prince Harry are nevertheless "already at work on a Kensington Palace nursery." At no point does the magazine address its November pregnancy story, which calls its credibility and reliability into question.

It should be noted that photos show Markle had no semblance of a baby bump when she stepped out with Prince Harry just weeks ago. Additionally, as opposed to having her gown enlarged due to a growing belly, The Sun recently reported that Markle's dress was taken in due to weight loss. It was specifically said she had to have the "wedding dress altered several times after losing a 'significant amount' of weight."

As a matter of policy, Kensington Palace would not comment on the In Touch cover story, but a royal staffer, who was not authorized to speak on the record, deemed the pregnancy claim "rubbish" that was seemingly only published to exploit the high interest surrounding the wedding. After all, the previous pregnancy narrative from this same outlet was manufactured to capitalize on the engagement news. It is almost a certainty that Markle and Prince Harry will one day have children, and they could be expecting a baby soon after tying the knot. But it is apparent the allegation she is already pregnant is unsubstantiated.

Selena Gomez, Justin Theroux NOT "more than friends," despite report