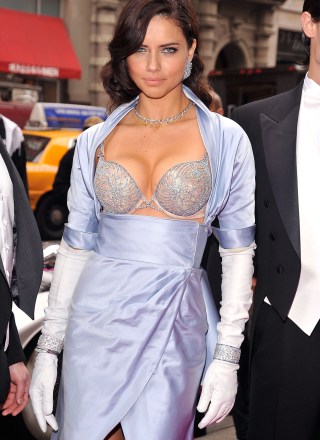 Adriana Lima only entered her first modeling contest as a teenager because a friend of hers did not want to enter alone, but it wasn't long before she started bringing home titles. At 15, she took first in Ford's Supermodel of Brazil search and then placed second in their Supermodel of The World contest in 1996. At 18, she moved to Manhattan, signed with Elite and built her portfolio doing editorial for Vogue and Marie Claire, runway for Vera Wang, Armani, Fendi and Ralph Lauren, print advertising for Guess and Doritos and spokesperson work for Maybelline (2003-09). Now, according to Forbes, she is the third highest-earning model with a whopping $6 million a year.  Most of her earnings can be attributed to her senior status as a Victoria's Secret Angel, a position she's held since 2000. She has occasionally popped up on TV shows and commercials like "Ugly Betty" and "how I Met Your Mother." The Pirelli calendar girl and devout Roman Catholic met NBA player Marko Jaric in 2006. They eloped in 2009 in Wyoming and wasted no time starting a family. Daughter Valentina was born in November of that year. Her sister Sienna followed in September 2012.