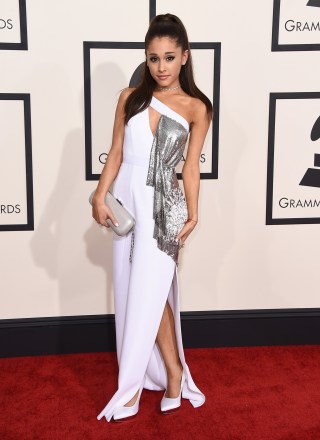 The most recent in a line of teenaged double threats Ariana Grande has been called the mini-Mariah, who the 20 year old readily admits is her biggest inspiration, since her first single, "Put Your Hearts Up," gained radio attention in 2012.  She continued her pop chart domination with "The Way" and released her debut CD, Yours Truly, in September 2013. She'd been acting since 2008 when she played Charlotte in the Broadway musical "13." In 2010, she landed a recurring role as Cat Valentine on Nickelodeon's "Victorious" series and now plays the same character in the spinoff "Sam & Cat." The flame-haired cutie's private life is pretty tame although reports of an online feud with her former bestie and costar Victoria Justice surfaced in early 2013. She was also commonly linked to Josh Hutcherson although both she and the "Hunger Games" hunk have both claimed that they are just friends. She dated Nathan Kress ("iCarly") for a short time in 2009.