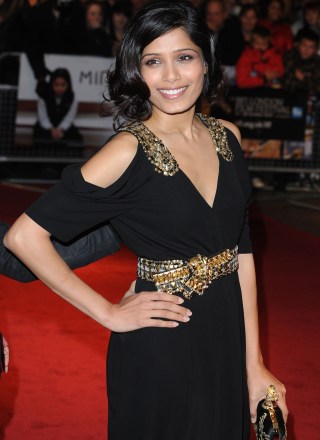 After working as an anchor of a TV travel show called "Full Circle" from 2006-07 and as a model in India, the raven-haired Bombay beauty Frieda Pinto got her big break when Danny Boyle chose her to be the female lead in Best Picture winner "Slumdog Millionaire" (2008). It was just after she'd earned a bachelor's degree in English literature from St. Xavier's College and started taking acting classes from theater guru Barry John. Previously engaged to publicist Rohan Antao, she moved on and in with her "Slumdog" costar Dev Patel. After appearing in a Bruno Mars video and dabbling in big-budget fare like "Rise of the Planet of the Apes" and "Immortals," she will next be seen in Terrence Malick's "Knight of Cups." In her spare time, she works with Andre Agassi's charity foundation and does work with the UN, Plan International and the World Bank to promote female empowerment and education and stop genital mutilation and child marriage around the world.

Courtesy of Genomind via AP Images