It's almost time: The Academy Awards will be handed out on Feb. 24, 2019! But before we see what the stars wear on the big night, Wonderwall.com is taking a trip down memory lane back to 2009 to see who wore what a decade ago. First up, a woman who back then still went by Beyonce Knowles! When it came time for Beyonce to pick an Oscars dress, she looked no further than her own fashion line — House of Dereon — for this strapless mermaid-style black-and-gold design. She was on hand to perform in a musical medley alongside Hugh Jackman, Zac Efron, Vanessa Hudgens, Amanda Seyfried and Dominic Cooper. Keep reading to see what more celebs wore to the 2009 Oscars…

Anne Hathaway looked like Oscar's counterpart in this sparkling silver confection by Armani Prive. She didn't take home a trophy that night, though she was nominated for best actress thanks to her work in "Rachel Getting Married."

Best actress nominee Angelina Jolie's black Elie Saab gown featured an exaggerated sweetheart neckline and a simple chiffon fabric. The star was recognized for her work in "Changeling" but lost out to Kate Winslet's performance in "The Reader."

Brad Pitt was on hand at the 2009 Oscars and looked sleek in a tuxedo and bow tie. He was up for best actor that night for his work in "The Curious Case of Benjamin Button" but lost to Sean Penn's performance in "Milk."

Amanda Seyfried looked like a Christmas present tied up in a bow in this sweet red spaghetti-strap Valentino number at the 2009 Academy Awards.

Best supporting actress nominee Amy Adams also rocked red — a strapless Carolina Herrera design with black piping. She was up for her performance in "Doubt" but lost to Penelope Cruz in "Vicky Cristina Barcelona."

Best actress nominee Melissa Leo, who was up for her work in "Frozen River," wore this bronze ruched satin frock by Badgley Mischka with bedazzled floral brooch-like details along the neckline. Later that night, she lost out to Kate Winslet, who won for her work in "The Reader."

It was a creamy strapless Prada gown, complete with an oversized bow, for presenter Jessica Biel in 2009.

Miley Cyrus looked like the belle of the ball at the 2009 Academy Awards. The star arrived on the red carpet in this stunning nude Zuhair Murad design comprised of tiered layers and plenty of delicate sequins.

That blue! Presenter Freida Pinto picked a stunning cobalt-hued dress by John Galliano for the big night. The gown featured one long lace sleeve and plenty of bedazzled embellishments.

"The Wrestler" star Marisa Tomei brought the drama in this pleated silk one-shouldered Versace creation. She was nominated that night for best supporting actress.

Queen Latifah rocked a midnight blue duchess satin layered design by Georges Chakra. She was on hand to present at the big show in 2009.

We almost didn't recognize Alicia Keys! The star wore this strapless pink pleated frock by Armani Prive ahead of her presenting duties at the 2009 Oscars.

Before she was known for rocking pantsuits on the red carpet, Evan Rachel Wood wore this creamy off-white strapless Elie Saab confection to the 2009 Academy Awards.

Too much tulle! Marion Cotillard, who was on hand to present, wore a black-and-navy dress dotted with sequins and layers upon layers of black tulle in 2009.

Cream was one of the biggest trends of the night! Penelope Cruz wore the hot color, selecting this stunning vintage Balmain design. She took home a best supporting actress Oscar that night for her work in "Vicky Cristina Barcelona."

Kate Winslet wore a sleek black-and-gray one-shouldered gown by Yves Saint Laurent. That beautiful dress ended up being a lucky charm — Kate won best actress for her performance in "The Reader" later that night!

Viola Davis was a vision in gold Reem Acra at the 2009 Academy Awards. She was up for best supporting actress that year for her work in "Doubt."

Mickey Rourke wore white! The star was up for best actor that year for his work in "The Wrestler" but lost out to Sean Penn. He did look snazzy in his white suit though!

Robert Pattinson was on hand at the 2009 ceremony on the heels of the release of the first "Twilight" installment. He presented at the Oscars while rocking this sharp tuxedo and bow tie.

The always stylish Tilda Swinton went with a beige-and-black Lanvin look for the 2009 Oscars, where she was a presenter.

Best actress nominee Meryl Streep wore an off-the-shoulder gray gown by Alberta Ferretti. Recognized for her work in "Doubt" that year, she lost to Kate Winslet in "The Reader."

Zac Efron was on hand to present at the 2009 Oscars. He looked sharp in this tuxedo and bow tie.

It was Marchesa for Vanessa Hudgens, who went with a black mermaid-style gown complete with plenty of tulle and floral appliques that evoked some serious prom vibes.

Oh hey, John Legend and Chrissy Teigen! The model wore a bedazzled orange confection while John kept things classic on the red carpet at the 2009 Oscars.

Emile Hirsch arrived in a classic black tux complete with a standard (not skinny!) black tie.

It was shiny, sparkly and silver for Leslie Mann in 2009! The star wore this sequined Pamella Roland frock, which had a plunging neckline, short sleeves and a glamorous train.

Heidi Klum opted for a slinky red number in 2009 — this off-the-shoulder design by Roland Mouret. She attended with then-hubby Seal, who's up next…

Seal kept things classic while on hand for the 2009 Academy Awards. The singer wore a simple black tuxedo and tie while attending with then-wife Heidi Klum.

Her hairstyle certainly hasn't changed! Lisa Rinna rocked her signature 'do with this halter-style purple gown, which ended in cascading ruffles, at the 2009 Oscars long before her days on "The Real Housewives of Beverly Hills."

It was ruby red for Virginia Madsen. The star wore this structured strapless design with a thigh-high slit to the Academy Awards in 2009. 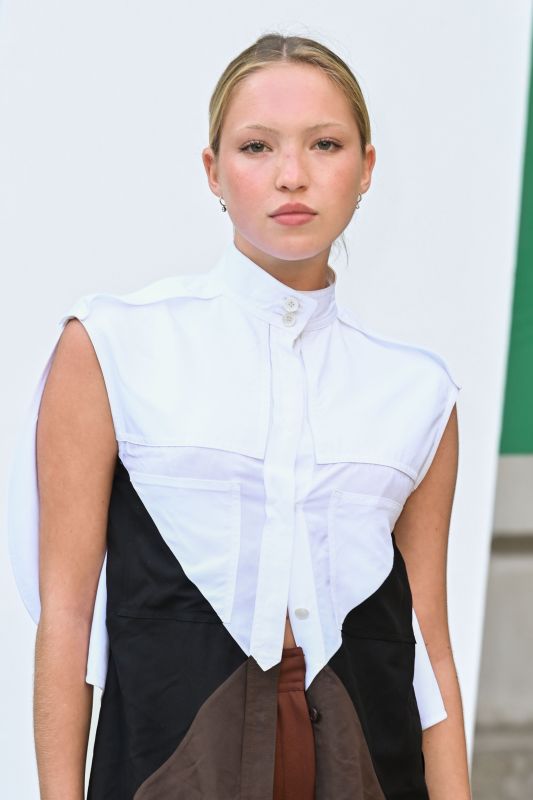 Up Next Model kids