The 2019 Grammy Awards are set to air on Feb. 10. Join Wonderwall.com as we travel back 30 years to see what the stars of 1989 wore on music's biggest night… starting with pop diva Paula Abdul. The "Cold Hearted" singer donned this iridescent mermaid gown with the must-have embellishment of the decade: lots and lots of ruffles. Paula finished her uber-'80s look with teased hair and dangling geometric earrings. Keep reading for more looks from the 1989 Grammys…

Miami Sound Machine's Gloria Estefan hit up the 1989 Grammys rocking a gold and glittery belly-dancing ensemble. Featuring mismatched sleeves, stacked bangle bracelets, a beaded hip skirt and dangling coins at the cuff of her leggings, Gloria looked like she was ready to shake her body and do the "Conga." The Cuban singer, who'd released her debut solo album the same year, was nominated for a Grammy for best pop performance by a group.

Musician Melissa Etheridge went a little country with a few bolo ties over a green dress shirt topped with a black suit jacket when she attended a 1989 Grammys afterparty at Chasen's restaurant in Beverly Hills.

Rockers Alice Cooper and Lita Ford arrived at the 1989 Grammy Awards in heavy-metal style. Alice kept his look rock 'n' roll with a studded leather jacket and fitted leather pants (that he playfully paired with a cummerbund) while Lita donned a killer chain-link dress with an oversized belt and lots of big hair and jewelry.

In 1989, fashion was edgy, which makes us cringe to see the floral off-the-shoulder dress that Olivia Newton-John wore to the Grammy Awards. The Australian singer-actress made the unfortunate decision to pair the look with pink suede kitten heels.

We really hope Vanessa Williams was hiding an amazing dress under this blue leather trench coat and floor-length pink scarf. The former Miss America-turned-pop star (and later, actress) arrived at the 1989 Grammys, where she was nominated for best new artist, wearing a shapeless ensemble that she accessorized with pink gloves and oversized onyx and gold earrings.

When it came time to get dressed for a Grammy Awards afterparty back in 1989, Winona Ryder went casual. Very casual!The star rocked a pale pink sweater over a white T-shirt with baggy belted jeans for a bash at Chasen's in Beverly HIlls with Adam "Ad-Rock" Horovitz from the Beastie Boys.

Natalie Cole made sure her 1989 Grammys fashion was on-point. Incorporating major trends from the decade — a monochrome color palette, a peek-a-boo bralette, shoulder pads, mixed patterns, an oversized hair accessory and orange-hued red lips — Natalie's all-black look was incredibly stylish for the time.

Singer k.d. lang rocked a heavily embroidered purple jacket at the award ceremony in 1989, the year she won for best country vocal collaboration for her song "Crying" with Roy Orbison.

Christina Applegate — then a star on "Married… With Children" — hit up a 1989 Grammys afterparty at Chasen's restaurant in Beverly Hills rocking tights with her sweet black-and-white minidress, which featured ruffled detailing at the collar and sleeves.

Al B. Sure showcased major swagger at the 1989 Grammy Awards. Nominated for his first Grammy, for best R&B vocal performance, Al arrived in a classic double-breasted tuxedo but added a small, stylish twist in the form of a bow-less tie.

Even though Sinead O'Connor was on the verge of becoming one of the most recognized (and controversial) music stars in the world, she didn't let the pressures of fame influence her Grammys fashion. The Irish singer, who was nominated for best female rock vocal performance, kept her look simple with a religious-themed T-shirt and distressed denim paired with an embroidered black leather jacket. Not shown in this image is the black-and-yellow bullseye Sinead painted on the side of her head, sending a message to the world about how she saw her celebrity status.

Nine years before his untimely death, INXS frontman Michael Hutchence attended the 1989 Grammys, where his band was up for best rock performance by a duo or group with vocal. With model girlfriend Rosanna Crash by his side, Michael stood out in a sea of black tuxedos in a green-and-orange plaid suit jacket, no shirt, thick-framed glasses and an expression that suggested he didn't really care what anyone else thought about him or his fashion.

That hair! Lyle Lovett arrived at the 31st Annual Grammy Awards back in 1989 rocking a red tie and his signature wild hair.

Al Green wasn't content wearing a basic black-and-white tuxedo to the 1989 Grammys. The "Let's Stay Together" singer shined on the red carpet with his gold cummerbund, bow tie and matching bracelets. The only thing more dazzling than his outfit? His megawatt smile.

Comedian and Grammys host Billy Crystal kept his award show look classic in a double-breasted tuxedo, but the jury is out on whether or not he wore funny underwear.

It was a red bolo tie for Huey Lewis, who rocked the so-'80s neck accessory at the 1989 Grammys.

Just by virtue of being himself, Weird Al Yankovic managed to make his striped tuxedo look humorous at the 1989 Grammys. The comedian and singer, who won a Grammy for best concept music video that year, added a touch of playfulness with a multi-colored bow tie and some seriously funny facial expressions.

Back in 1989, Linda Ronstadt was singing in Spanish. That year, the transition to music close to her Mexican roots paid off — she won best Mexican-American performance for "Canciones de mi Padre," and her wardrobe was apropos for the win: a Latin-inspired floral embroidered skirt and bolero jacket combo.

While Steve Winwood stuck with a traditional look — a black tuxedo — at the 1989 Grammys (where he was nominated for three awards), wife Eugenia Winwood went for the sparkle. Donning this heavily sequined shift dress with a rhinestone-embellished organza chest panel, Eugenia (who'd given birth two months earlier) was able to maximize her comfort while still shining like a disco ball.

"Superwoman" singer Karyn White hit the 1989 Grammys red carpet rocking the biggest fashion trends of the year: metallic fabric, layered ruffles and slim-fitting gloves. Nominated that year for best female R&B vocal performance for her hit single "The Way You Love Me," Karyn was accompanied by rapper Kool Moe Dee, who was celebrating his own nomination for best rap performance in a blue leather suit, matching skullcap and mega-sized shades.

Manhattan Transfer, who won the Grammy for best pop performance by a group in 1989, were celebrity representatives of true '80s fashion. Members Janis Siegel and Cheryl Bentyne opted for bold monochromatic looks, while Tim Hauser (left) perked up his style with a blue bow tie. Bandmate Alan Paul (right) took his style one step further with an all-blue suit accessorized with a playful green bow tie and cummerbund.

American Jazz trumpeter Dizzy Gillespie was all smiles at the 1989 Grammys. Donning a crisp, classic tuxedo, this legendary musician was celebrating earning a lifetime achievement Grammy for his impressive 54-year career in music. 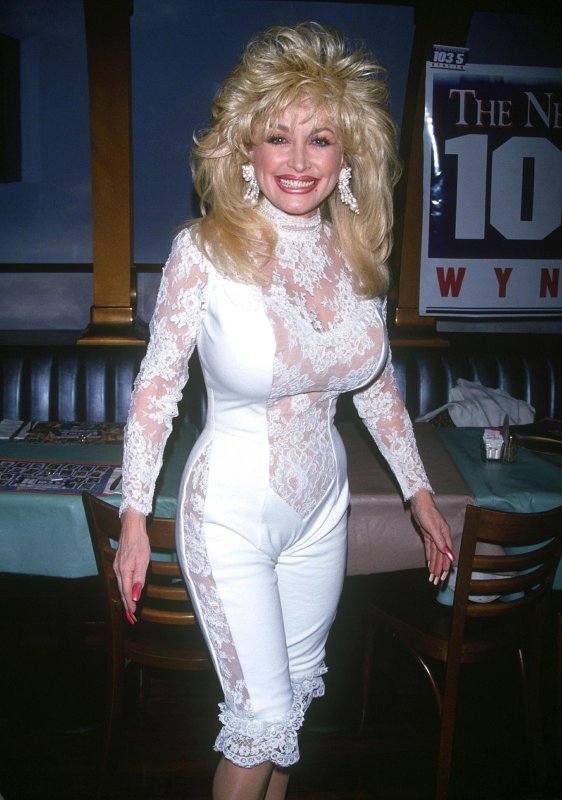 Up Next Wonderfully Wacky