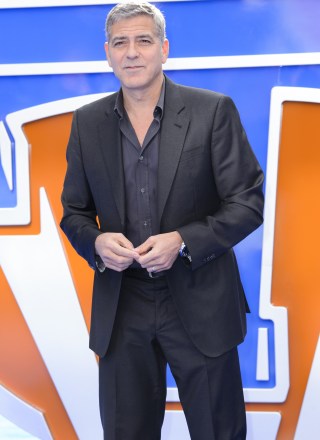 Share Tweet Pin Email
Before George Clooney was a quadruple threat (actor/writer/director/producer), Oscar winner, salt-and-pepper prankster palling around with Brad Pitt and Matt Damon at his Lake Como palace, motorcycle-riding humanitarian/political activist and two-time Sexiest Man Alive, he was nicknamed Frankenstein after a vicious bout with Bell's Palsy, had a mullet, dropped out of college, lived in a walk-in closet and made '80s ends meet with bit parts in forgettable TV shows ("Throb", "Street Hawk") and movies ("Return Of The Killer Tomatoes!"). Even a two-season run as "The Facts of Life" carpenter and a relationship with Kelly Preston failed to make him a household name. That changed when he donned Dr. Ross' scrubs in 1994 for "ER," which garnered Clooney two Emmy nominations. It also got him back on the big screen ("One Fine Day," "Batman & Robin," "The Perfect Storm," Ocean's franchise). He move don to writing ("Good Night, and Good Luck") and directing ("Confessions of a Dangerous Mind"). A six-time Oscar nominee, he won a Golden Globe for "O Brother Where Art Thou?" and Oscars for "Syriana" and "Argo." After divorcing Talia Balsam, he had famously sworn off marriage instead dating a string of much-younger waitresses (Celine Balitran, Sarah Larson) and actresses (Krista Allen, Lisa Snowdon, Elisabetta Canalis). He and two-year squeeze Stacy Keibler broke up in July 2013 over the kid issue, but shocked the world less than a year later by proposing to British attorney Amal Alamuddin.