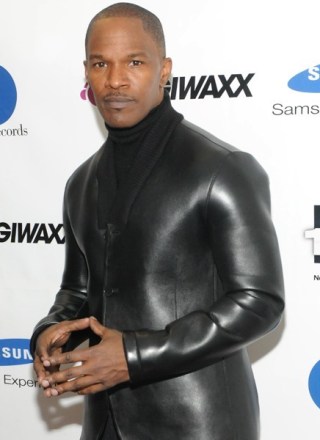 Share Tweet Pin Email
Jamie Foxx, who was raised by his grandparents and enjoyed music and sports while growing up in Texas, was a music major at San Diego's U.S. International University when he got his first taste of comedy at a club's open mike. He moved north to LA and booked a regular gig on In Living Color. Fox gave Foxx, who released the R&B CD Peep This in 1994, his own show from 1996-2001. In 1999, playing a footballer in Any Given Sunday made people reconsider his dramatic possibilities and this led to leads in Ali, Collateral and Ray. Playing the blind pianist earned him an Oscar and a Golden Globe. The Django Unchained actor returned to music in 2006 with chart topper Unpredictable and in 2008 with Intuition. "Blame It" hit no. 5 on Billboard's Hot 100 and he also won awards and kudos for his "Gold Digger" collaboration with Kanye West. The Annie and Miami Vice star has two daughter Corinne (b. 1994) and Annalise (b. 2009) by two different women. Recently, he was linked to Katie Holmes, but he shot down the rumors