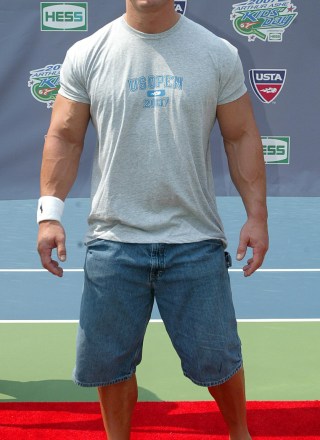 As one of wrestling announcer Johnny Fabulous' five sons, it is only natural that John Cena liked to roughhouse. He was a gym rat by 15 and studied exercise physiology while playing football at Massachusetts' Springfield College. He made his way across the country with only $500 in his pocket to try his hand at bodybuilding professionally. He lived in his Lincoln and made ends meet by folding towels and scrubbing toilets at Gold's Gym until a gym client suggested he take wrestling classes at a feeder company for World Wrestling Entertainment. As "The Prototype," Cena's wrestling ascension was rapid, capturing his first title in April 2000, making his WWE Smackdown debut in June 2002, and defeating The Big Show for the United States Championship in March 2004. The Marky Mark of Wrestling eventually moved into movies (2006's "The Marine," 2009's "12 Rounds"), music (His 2005 rap album, You Can't See Me, debuted at No. 15 on the Billboard chart.) and TV (competed on Celebrity Apprentice). Now dating female wrestler Nikki Bella of "Total Divas" fame, he was previously married to Elizabeth Huberdeau from 2009-12.