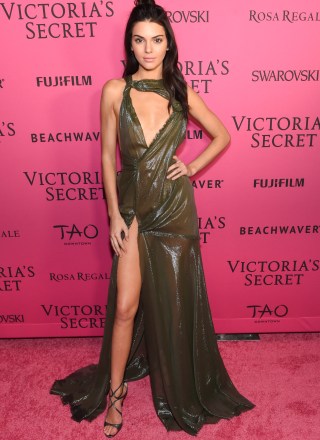 Share Tweet Pin Email
The second-youngest member of the Kardashian Klan, Kendall Jenner is the daughter of 1976 Olympic decathlon winner Bruce Jenner, who is now living as a woman named Caitlyn, and mom-ager Kris Jenner and the half-sister of Kourtney, Kim and Khloe. The stunner practically grew up on E! reality series Keeping Up With The Kardashians, first appearing in 2007. The former cheerleader has branched out from pesky younger sibling to in-demand model, social media maven, fashion designer (She and sister Kylie created a line for PacSun in 2013, OPI nail colors, jewelry for Glamhouse called Metal Haven and shoes and handbags for Steve Maden.), TV host and author (Again with Kylie's help, she penned a sci-fi novel called Rebels: City of Indra in 2014. Time magazine named the Jenner sisters as two of the most influential teens on Earth in 2014. She has been linked to Will Smith's son Jaden and One Direction's Harry Styles. She sent the rumor mill into overdrive in May 2015 when she shared a snapshot of herself at the Grand Prix in Monte Carlo sporting race car driver Lewis Hamilton's signature gold chain.