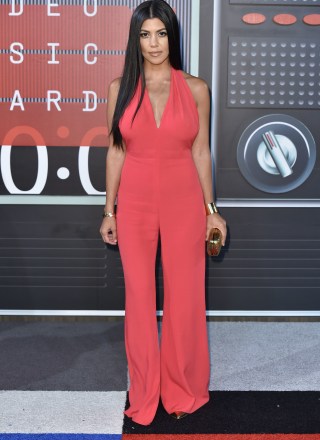 Kourtney Kardashian is the oldest of Kris Jenner's kids with late O.J. Simpson defense attorney Robert Kardashian, Before hitting popularity pay dirt alongside her klan on Keeping Up With The Kardashians in 2007, she graduated from University of Arizona with a degree in theater arts and Hispanic studies (She's bilingual!), got a boob job, and kickstarted the family's fashion empire with children's boutique Smooch in Calabasas, Calif., in 2003. After roughing it with other trust funders on Filthy Rich: Cattle Drive in 2005, she collaborated with her sisters to open clothing boutique DASH. In 2009, Kourtney and Khloé Take Miami covered the store's expansion to Florida and 2011's Kourtney and Kim Take New York saw the opening of a flagship in the Big Apple. The former party girl was the first of her siblings to become a mom when she welcomed son Mason in December 2009 and daughter Penelope in July 2012 with Scott Disick, who she has dated on and off since 2006. In 2014, she birthed the Kardashian Kids line and son Reign.