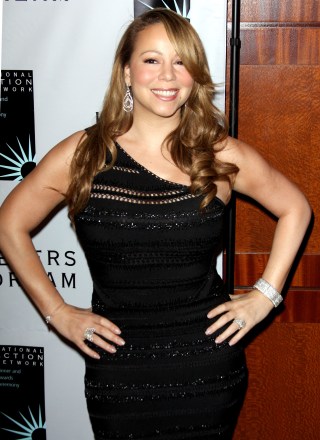 While working as a coat-checker in 1988, Mariah Carey and her five-octave range met Sony Music mogul Tommy Mottola, who signed her and oversaw the making of her 1990 self-titled debut with its four No. 1s. The 1991 Best New Artist iGrammy winner followed up with a platinum 1992 Unplugged album. Her 1993 wedding to Mottola was a $500,000 "Vision Of Love." Carey would go on to sell more than 200 million records, release the best-selling holiday album of all time, top charts with "Fantasy," "Dream Lover," Honey," "Heartbreaker" and "Butterfly," receive Billboard's Artist of The Decade Award and three more 2006 Grammys, perform at the Super Bowl and became the best-selling female artist of all time. She has also tried her hand less successfully at acting (Glitter, Precious), perfume creating (M by Mariah Carey) and judging American Idol Season 12. It took quite some time to get her personal life in order. Her marriage to Mottola ended in 1997 after claims she cheated with Yankee Derek Jeter and she spent the next few years rebelling against his overprotective ways in trendy clubs and trashy clothes. On the heels of a 2001 breakup with Luis Miguel and an erratic appearance on MTV's TRL, she was treated multiple times in mental health facilities. In 2008, she married much younger Nick Cannon and welcomed twins, daughter Monroe and son Moroccan, in April 2011. Happiness faded with a public breakup in Aug. 2014. Cannon filed for divorce in Jan. 2015.