From hosting her own talk show for 25 years to launching her own cable network, Oprah Winfrey is the living embodiment of how decades of hard work can pay off. Now, with an estimated net worth of $2.6 billion, according to Forbes Magazine, Oprah is the first female African American billionaire. In celebration of the media mogul's 67th birthday on Jan. 29, 2021, Wonderwall.com is taking a closer look at the business of being Oprah. Keep reading to find out everything about the influential and history-making Queen of All Media's money matters…

RELATED: COVID-19 vaccine: All the stars who got the shot

Oprah Winfrey, who was born on Jan. 29, 1954, in Kosciusko, Mississippi, is among the most successful people in the world, but she endured a tumultuous upbringing before she made her fortune. Oprah spent her early years living in poverty with her grandmother, Hattie Mae Lee. When she was 6, she relocated to inner-city Milwaukee to live with her mother, Vernita Lee, but while her mother was at work, Oprah was sexually assaulted by multiple people including her own relatives, which she revealed on a 1986 episode of her talk show that focused on sexual abuse. Following years of abuse, Oprah was sent to live with her father, Vernon Winfrey, in Nashville where she began to excel both socially and academically. She became an honors student, was voted the most popular girl at school, competed in (and won) various beauty pageants and won an oratory contest, which resulted in a full scholarship to Tennessee State University.

When she was in her senior year of high school, Oprah Winfrey caught the attention of WVOL, a local black radio station, and was hired as a part-time reporter. She was then hired at Nashville's WLAC-TV, making her the first black female news anchor in the city. In 1976, she dropped out of college and relocated to Baltimore, where she worked at WJZ-TV as a co-anchor for the 6 o'clock news. In 1978, she co-hosted her first talk show, "People are Talking." According to Oprah, during her time on the show, she was subjected to sexual harassment and was fired less than eight months after starting.

In 1983, Oprah was sent to Chicago to host WLS-TV's low-rated morning talk show, "AM Chicago." Within just one month of hosting, the show became the highest rated talk show in the city. Soon after, it was renamed "The Oprah Winfrey Show" and expanded to a full-hour time slot.

In the mid-'80s, Oprah landed her first acting gig: She played Sofia in Steven Spielberg's 1985 drama "The Color Purple." Her feature film debut was met with immense praise and earned her Academy Award and Golden Globe Award nominations for best supporting actress. "The Color Purple" was a major box office success that grossed more than $142 million worldwide. This would be the first of a slew of acting roles the media mogul would take on later: She also appeared in films like "Beloved" and "Selma," which were co-produced by her company, Harpo Productions.

"The Oprah Winfrey Show" aired from Sept. 8, 1986, to May 25, 2011 — a total of 25 seasons — making it one of the longest running syndicated television talk shows in American history. The show, on which Oprah featured a plethora of both celebrities and everyday people, was praised for revolutionizing tabloid talk shows with its intimate, confessional-like reporting. It also garnered a whopping of 47 Daytime Emmy Awards before 2000, and at its peak raked in $300 million a year. During the final taping of her eponymous show, Oprah shared the impact it had on her. "It's no coincidence that a lonely little girl who felt not a lot of love… it's no coincidence that I grew up to feel the genuine trust, validation and love from you," she told her audience. "You and this show have been the greatest love of my life."

In 1988, Oprah Winfrey founded her own production company, Harpo Productions. Until 2013, Harpo Films Inc. was the biggest subsidiary of Harpo Productions. It produced a plethora of projects including "The Great Debaters," "Precious: Based on the Novel Push by Sapphire" and "The Hundred-Foot Journey." However, the division ultimately shut down and many of its employees were transferred to Harpo Studios' scripted series department.

In 1996, Oprah Winfrey introduced the "Oprah's Book Club" segment to her talk show, which focused on popularizing obscure novels, both old and new. The book club became an immensely powerful force: Whenever Oprah introduced a title as her book club selection, it became a bestseller. She's credited for using her platform to not only spotlight underappreciated novels but encourage millions of people to read more. Her ability to influence wide audiences in this way has been dubbed the "Oprah Effect."

In April 2000, Oprah Winfrey went on to launch her own print publication, "O The Oprah Magazine." The mag has been wildly successful since its inception, at one point amassing a monthly readership of 2.4 million. In October 2018, O also established a digital home with OprahMag.com — a move seen as a viable opportunity to generate more revenue for Oprah's Harpo Inc. and Hearst Communications. Hearst Magazines CCO Kate Lewis believed "going digital" would give them the opportunity to connect with readers daily rather than just monthly.

In 2002, Oprah created the Oprah Winfrey Leadership Academy Foundation as a means of raising money to build and operate a boarding school for young girls in South Africa. Inspired by her own childhood, Oprah founded the academy as a means of providing both educational and leadership opportunities for gifted South African girls who come from impoverished backgrounds. On Jan. 1, 2007, the Oprah Winfrey Leadership Academy for Girls opened its doors, and its first class of 72 girls graduated in 2011. In 2006, Oprah donated a reported $36 million of her own money to the foundation, and as of 2017, she's gifted nearly $150 million to the OWLAF.

Oprah Winfrey doesn't just make money — she also gives a lot of it away. Her commitment to empowering women, especially, is evident in the various causes she supports. In June 2016, the philanthropist donated $1 million to N Street Village — a nonprofit organization that provides housing to low-income and homeless women in Washington, D.C. Then, according to CNBC, in January 2018, she donated $100,000 to the Time's Up campaign. She's also donated to a variety of charities including the Ron Clark Academy, Rise Against Hunger, March for Our Lives, the GEANCO Foundation and Save the Children, among many, many others. Amidst the coronavirus pandemic in 2020, Oprah donated $12 million to several organizations in five of her "home cities" — Chicago, Milwaukee, Baltimore, Nashville and Kosciusko, Mississippi — to aid in relief efforts. She also donated an additional $3 million to an L.A.-based organization.

On Jan. 1, 2011, she launched the Oprah Winfrey Network (otherwise known as OWN). The network largely features content marketed toward African American audiences, from original scripted series like Ava DuVernay's "Queen Sugar" to reruns of popular talk show programs like "The Oprah Winfrey Show." Despite initially being a 50/50 joint venture with Discovery Inc., in December 2020, Oprah sold 20.5% of her former 25.5% stake in the company to Discovery. What did she receive in exchange? That would be 1.34 million shares of Discovery stock worth about $36.5 million. However, Oprah held on to her CEO and chief creative officer positions.

In 2015, the acclaimed media mogul made a major business deal with Weight Watchers. That year, Oprah Winfrey bought 10% of the company for a whopping $43 million, and according, to CNN, her investment grew to be worth more than $400 million. Oprah is a board member and has also appeared in a variety of commercials for the brand. Her involvement has boosted the company's subscribers by a substantial number.

Historic talk show host, businesswoman… and author! Oprah Winfrey has written a plethora of biographical novels including "The Uncommon Wisdom of Oprah Winfrey," "Journey to Beloved" and "What I Know For Sure." She's pictured here holding "The Wisdom of Sundays," a poignant self-help book she authored in 2017. Her latest book, "The Path Made Clear," hit shelves in 2019.

Oprah Winfrey made her return to acting in 2018's "A Wrinkle in Time," in which she starred alongside Storm Reid, Reese Witherspoon, Mindy Kaling, Zach Galifianakis and Chris Pine. The film was directed by Ava DuVernay, who also directed 2014's "Selma," which was co-produced by Oprah's Harpo Productions. Oprah is also the executive producer of Ava's drama series "Queen Sugar," which airs on the Oprah Winfrey Network. "A Wrinkle in Time" grossed $133.4 million worldwide.

In June 2018, Apple announced a $1 billion, multiyear partnership with the businesswoman. The partnership will see Oprah Winfrey creating new original series exclusively for Apple TV+ as well as a revamped version of her ever-successful book club. At a launch event with Apple TV+ in March 2019, Oprah discussed two documentaries that are in the works with the streaming service — "Toxic Labor," which takes a closer look at the implications of workplace sexual harassment, and another untitled multipart documentary that explores mental health (Prince Harry is also involved). At the event, Oprah shared her personal hopes for her Apple content. "I want to reach that sweet spot where insight and perspective, truth and tolerance actually intersect," she shared.

On Jan. 3, 2020, Oprah Winfrey launched her "Oprah's 2020 Vision: Your Life in Focus" nine-city arena tour in partnership with Weight Watchers Reimagined. "I'm hitting the road to bring this wellness event across the country to help make 2020 your year of transformation and triumph," she wrote on Instagram. "We'll come together (with some of my friends) to support each other for a stronger, healthier, and more abundant life." The tour kicked off in Fort Lauderdale, Florida, and featured Grammy-winning singer Lady Gaga as its first special guest. Tina Fey, Dwayne Johnson, Michelle Obama and Tracee Ellis Ross were among the stars also making appearances.

We can't discuss the business of being Oprah Winfrey without mentioning her lucrative real estate deals! In 2001, she purchased her main residence — a 23,000-square-foot estate in Montecito, California, which she's dubbed "The Promised Land" — for $50 million. The media mogul also has land in Hawaii: In 2003, she purchased two properties in the Valley Isle area of Maui — a combined 23 acres — for $5.3 million. While filming "The Oprah Winfrey Show," she also owned a slew of properties in Chicago including four condos in a luxury duplex, a three-bedroom apartment in the Four Seasons Hotel and three units in a historic downtown building. Aside from her Montecito home, the businesswoman owns estates around the nation that she purchased at various price points — one on Orcas Island, Washington, for $8.2 million; one in Telluride, Colorado, for $14 million; and one in Maui for $32 million.

As for Oprah Winfrey's latest endeavors? In 2020, she launched two shows as part of her exclusive deal with Apple TV+. The 13-episode series "Oprah Talks COVID-19" debuted that March and featured in-depth discussions with various experts about aspects of the pandemic, including its impact on Black Americans. "The Oprah Conversation," which premiered in July, saw the famed talk show host conduct interviews with influential figures from Barack Obama and Stevie Wonder to Mariah Carey and Dolly Parton. 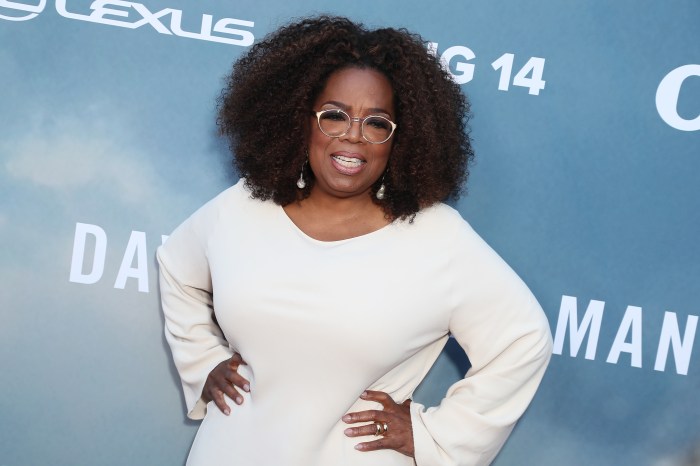 Up Next Birthday girl mogul