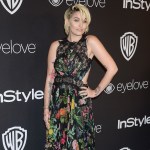 The 18-year-old daughter of Michael Jackson sat down with Rolling Stone for an intimate interview, where she talks about her issues with depression and drugs. Paris attempted to commit suicide at age 15, and says the highly publicized incident was just one of multiple attempts.

"It was just once that it became public," Paris reveals to the magazine, also sharing that she had been cutting herself at the time and hiding it from her family. "It was just self-hatred, low self-esteem, thinking that I couldn't do anything right, not thinking I was worthy of living anymore."

Part of Paris' depression she says came from hanging out with "a lot of older people doing a lot of crazy things" when she entered a private school in the seventh grade, because she didn't fit in with kids her own age.

Later, Paris says she was sexually assaulted by a "complete stranger" when she was 14 years old.

"I don't wanna give too many details," she says. "But it was not a good experience at all, and it was really hard for me, and, at the time, I didn't tell anybody."

Eventually, Paris finished high school at a therapeutic school in Utah, which she says turned her into a "completely different person." Paris says her father also struggled with depression, and that the two were prescribed the same antidepressants. Paris is no longer on any psych medication, and is also now sober. She says some of her multiple tattoos cover track marks from drug abuse.

"I was crazy. I was actually crazy," she admits. "I was going through a lot of, like, teen angst. And I was also dealing with my depression and my anxiety without any help."

These days, Paris has an interest in modeling, which she says has helped with her longtime self-esteem issues.

"Plenty of people think I'm ugly, and plenty of people don't," she muses. "But there's a moment when I'm modeling where I forget about my self-esteem issues and focus on what the photographer's telling me — and I feel pretty. And in that sense, it's selfish."

As for those questioning who Paris inherited her looks from — her mother, Debbie Rowe, or Jackson — despite the online trolls, she fiercely defends her parentage.

"He is my father," Paris stresses, addressing speculation that the late King of Pop was not her biological father. "He will always be my father. He never wasn't, and he never will not be. People that knew him really well say they see him in me, that it's almost scary."

"I consider myself black," she adds. "[My father] would look me in the eyes and he'd point his finger at me and he'd be like, 'You're black. Be proud of your roots.' And I'd be like, 'OK, he's my dad, why would he lie to me?' So I just believe what he told me. 'Cause, to my knowledge, he's never lied to me."

And Paris says the music legend definitely wouldn't have minded her pursuing a career in the spotlight.

"Paris is in a very happy place," a source close to the teenager told ET. "She is pursuing her creative interests as an 18-year-old woman and feels like this is finally her time. She wants to try modeling, acting and has been songwriting. She is grateful for the opportunities ahead."