The "Property Brothers" Drew and Jonathan Scott are not in a "family feud," despite a new report. Gossip Cop can correct the claim. Far from being "estranged" or "torn apart" from one another, the TV star twins are very much in each other's lives both personally and professionally. 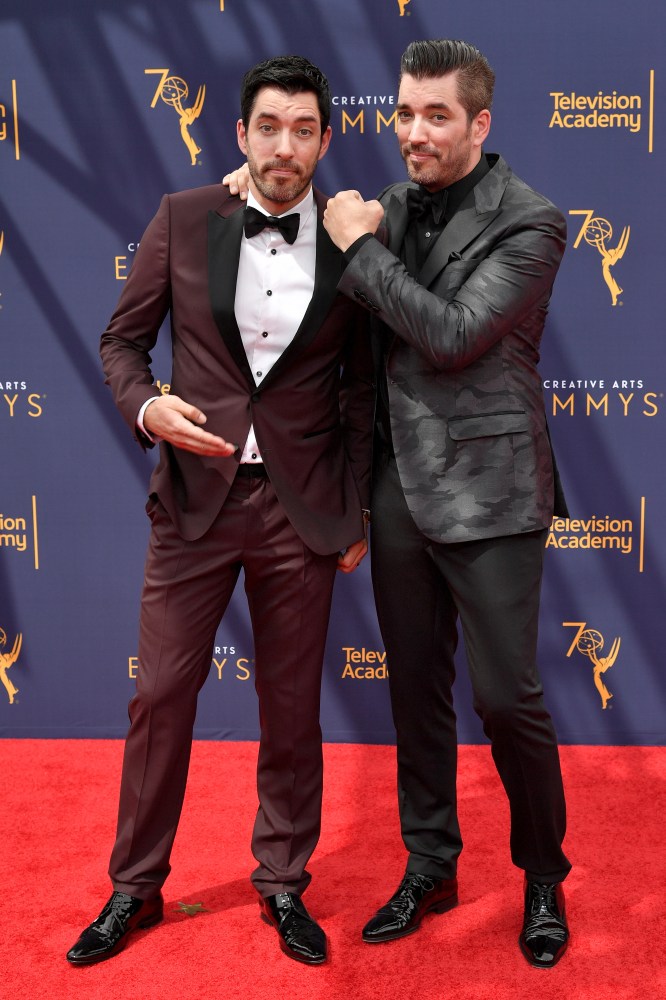 According to Star, ever since Drew tied the knot with Linda Phan this past spring and his brother got "dumped" by longtime girlfriend Jacinta Kuznetsov, Jonathan "feels left out in the cold." An unnamed and seemingly made-up "source" is quoted as saying, "Now that Drew is married, Jonathan is feeling complete estranged from his brother. This could spell the end of their show." "Jonathan is feeling completely isolated and abandoned," asserts the magazine's untraceable "source" using repetitive language, before adding, "This could mean the end of TV's most successful partnerships."

Just because one sibling got married and planned to move to L.A., and the other had a breakup doesn't mean they are in a "family feud." Nor does it portend that their show will come to an end. In fact, the tabloid doesn't explain at all how them living separately means they're in a "feud." Additionally, the magazine doesn't furnish any examples of them fighting or even mildly disagreeing. Instead, it took disparate events and tried to tie them together to manufacture a fictitious "feud." But like a home with a bad foundation, the magazine's story falls apart.

A simple glance at the twins' individual as well as Property Brothers' Twitter accounts shows just how close the two are. Also, barely a day goes by in which they're not pictured together on their social media feeds. And contrary to the main premise about them being in a family feud, last Friday, Jonathan tweeted of photo of himself with Drew and his wife, along with the caption, "Family time is the BEST time," and hashtags "#Love #Family." Drew tweeted the same photo, but he captioned his with the words, "#Family game night" and a heart emoji. Those are hardly the words of siblings who are "torn apart."

The contention that their (nonexistent) "feud" could mean "the end of their show" is also nonsense. Just three weeks ago, Drew and Jonathan came back for a 13th season of "Property Brothers." And every Wednesday, the "Property Brothers" promote that week's new episode together.

It should be noted that Star's sister publication tried earlier in the year to claim the twins were feuding. After Gossip Cop debunked that phony report, Drew tweeted, "Ha. Some people love to make up fake drama. Our family is as close as we've always been!" Perhaps it's time for these tabloids to get better sources or even just Twitter.

Conclusion: The "Property Brothers" are not in any sort of "feud" because Drew got married and Jonathan and his girlfriend split up. (For the record, Jonathan and Kuznetsov amicably split. He was not "dumped," as falsely tainted by the tabloid.) And while the gossip magazine bandied about the word "feud" and claimed the twins' hit HGTV show could end as a result of them supposedly being "torn apart," the outlet gave no proof whatsoever of them having problems.

The publication simply printed quotes from an unidentifiable or possibly concocted "source." Conversely, Gossip Cop relies on primary sources, which is why we'll take the words of the Scott brothers, who routinely express their love for one another. They even happily posed together just 12 days ago at the Creative Arts Emmy Awards in Los Angeles (see above). For those reasons and others mentioned above, Gossip Cop is giving the tabloid's tale a 0 on our fact-or-fiction meter.