It's always fun to watch royal families grow (hello, Louis, Charlotte and George!). But what about the children who were conceived outside the royal marriage? Join Wonderwall.com as we take a look at royals from across the globe who have acknowledged their illegitimate children… Prince Albert and Princess Charlene said "I do" in 2011, and three years later they welcomed twins. But before he was dad to Princess Gabriella and Prince Jacques, Albert fathered two kids with two different women. Now, while his marriage has faced ups and downs, the Monégasque monarch has a solid relationship with his illegitimate children: daughter Jazmin Grace Grimaldi and son Alexandre Grimaldi-Coste, who've spent time with half-siblings Gabriella and Jacques, as seen in Jazmin's 2021 highlights post on Instagram (see the pic here).

Keep reading to see all-grown-up Jazmin and Alexandre, plus more royals who had kids out of wedlock…

Jazmin Grace Grimaldi was born in 1992 after Prince Albert had a brief relationship with her mother, Tamara Rotolo. More than a decade later in 2003, Alexandre Grimaldi-Coste was born to flight attendant Nicole Coste. Though he initially kept Jazmin a secret and denied paternity of Alexandre until a DNA test proved otherwise, Albert has embraced his two eldest children, even stepping out publicly with Jazmin, who's now an actress and singer. Keep reading to see her half-brother…

Alexandre Grimaldi-Coste's mother is Nicole Coste, who was involved with Prince Albert for years before his marriage to former Olympic swimmer Charlene Wittstock. Albert confirmed he was was Alexandre's biological father in May 2005, just before he was enthroned as Prince of Monaco. In 2021, Nicole told Paris Match that Albert has maintained a constant presence in his son's life, including throwing him a lavish party in August 2021 to celebrate his 18th birthday. Half-siblings Jazmin Grace Grimaldi and Alexandre are close: They happily posed together at the party in a series of sweet snaps she shared on Instagram.

RELATED: The top 30 royals in the line of succession to the British throne

Captain Mark Phillips, the first husband of Queen Elizabeth II's daughter, Princess Anne (seen here on their wedding day in 1973), became a dad to daughter Felicity Tonkin in 1985 after an extramarital affair with New Zealand art teacher Heather Tonkin. The captain was confirmed to be her father as part of a paternity suit in 1991. He and Anne divorced a year later. His indiscretion made news again when New Zealand-based Felicity, who is the half-sister of royals Zara Tindall and Peter Phillips, welcomed her first child, a son, in 2017.

Marina Ogilvy, a goddaughter of Prince Charles and the daughter of Queen Elizabeth II's cousin Princess Alexandra, sparked a major royal scandal in 1989 when she learned she was expecting with photographer boyfriend Paul Mowatt, a commoner who's the son of a Scottish trumpeter. They married while she was expecting, and their daughter Zenouska was born a few months later. Marina (pictured with Paul and Zenouska in 1996) was the Windsor family's black sheep for years after she gave an interview claiming her royal parents had given her an ultimatum: a shotgun wedding or an abortion. Zenouska, now head of marketing for a U.K. jewelry company, chronicles her fashionable life on the London social scene and regularly attends events with Prince William, Duchess Kate and the rest of the royal family. (She was in attendance at the extended Windsor family Christmas lunch in 2017 when Meghan Markle met the group!)

Prince George, the Duke of Kent — the younger brother of kings Edward VII and George VI and uncle to Queen Elizabeth II — fathered two children out of wedlock. A son, Michael Temple Canfield, was born to American socialite Kiki Preston in 1926. A daughter, Raine McCorquodale, was born in 1929 to author Barbara Cartland (who also was married at the time). Both of Prince George's illegitimate children went on to make names for themselves: Michael married Caroline Lee Bouvier, the younger sister of first lady Jacqueline Kennedy, and Raine became stepmother to Princess Diana.

When young Princess Thyra of Denmark fell for cavalry lieutenant Vilhelm Frimann Marcher and got pregnant, the Danish royal family orchestrated a 19th-century cover-up. Her mother, Princess Louise, arranged for Thyra to deliver the baby, named Maria, in Greece, in 1871. The Danish press were told that Thyra was in Athens recovering from a bout of jaundice. Baby Maria was adopted by a Greek family and renamed Kate. Thyra went on to marry and have six children with her husband, Prince Ernest Augustus of Hanover, but reportedly was haunted throughout her life by thoughts of the baby she gave up.

Prince Bernhard of the Netherlands had four daughters with his wife, Queen Juliana, including Beatrix (far right), who would one day become queen. Bernhard also had two daughters born out of wedlock: Alexia Grinda-Lejeune, whose mother was the prince's French mistress Hélène Grinda, and Alicia von Bielefeld, whose whose mother was never publicly identified but was believed to be American. Bernhard admitted being a father to two illegitimate children in a series of astonishing confessions to journalists before his death in 2004.

King Albert II's affair with Baroness Sybille de Selys Longchamps resulted in a daughter, Delphine Böel. Albert — who abdicated the throne in 2013 and was succeeded by his son, the current King Philippe — had long refused to recognize the Belgian artist as his. But after a bitter seven-year legal battle and a DNA test Albert agreed to take in 2019, he confirmed she was his fourth child in early 2020. Later that year Delphine went to court to ask for royal status and won, becoming Princess Delphine. Her two children, Oscar and Josephine, also became prince and princess. "A legal victory will never replace the love of a father," her lawyers said in a statement at the time, "but offers a feeling of justice, further reinforced by the fact that many children who have gone through the same ordeals will find the strength to face them." Albert isn't the only Belgian royal with a love-child scandal. Read on for details on Albert's dad, King Leopold III…

Like son King Albert II, Belgium's King Leopold III had an illegitimate child, according to the book "Dramas in the Belgian Royal House (1935-2002)." Author Leo Van Audenhaege contends that Albert fathered daughter Ingeborg Verdun with Austrian skating star Liselotte Landbeck, making Ingeborg half-sister to Albert. Leopold was a widow at the time of the secret romance, Van Audenhaege wrote in the book, which made headlines in Belgium. The king's first wife, Queen Astrid, was killed in a 1935 car accident in which Leopold was behind the wheel. The Belgian Royal Palace has never commented on Ingeborg, who has maintained anonymity but is believed to have settled in America.

Prince Carlos, the Duke of Parma, fathered a boy named Hugo Klynstra in 1997. Hugo's mother was the prince's childhood friend Brigitte Klynstra, not the prince's wife, Annemarie Cecilia Gualthérie van Weezel (seen here with him in 2013). At 18, Hugo sought to change his surname to that of his biological father. After a long legal fight in which Carlos claimed that Hugo had been the result of a no-strings-attached relationship, Hugo succeeded. He was accepted as a member of the Dutch royal family in 2016 when a court ruled in his favor, making him Prince Carlos Hugo Roderik Sybren of Bourbon-Parma.

Leandro Ruiz Moragas was the illegitimate son of Spain's King Alfonso XIII and his mistress, actress Carmen Ruiz. Leandro was quietly supported by the royal family for most of his life but after the relationship soured, he penned the 2002 book "Royal Bast***" about his secret heritage. "I refuse to remain in the obscurity that has been imposed upon me," he wrote in the book. "I demand recognition for the privileges to which my birth entitles me and which I will never renounce." In 2003, he successfully petitioned to use his royal family's surname, Bourbon, and became a prince at 74. He died 13 years later, of pneumonia, at 87.

Back in 12th-century England, mistresses were as much an accepted part of royal life as a crown. King Henry I, son of William the Conqueror, is believed to have fathered at least 22 illegitimate children, 14 of whom he formally recognized. Many were given the last name Fitzroy, which translates to "son of the king" and at the time was commonly used by illegitimate children of a monarch.

King Louis XIV had one child who survived to adulthood with his wife, Maria Theresa of Spain. But the French ruler fathered more than a dozen illegitimate children with a number of women. Madame de Montespan, who eventually became the king's chief mistress, had seven of his babies, while her rival Louise de La Vallière bore five of Louis' offspring. Louis eventually legitimized most of his children born to mistresses in the years following their births.

Of the many illegitimate children England's King Henry VIII is believed to have fathered, only one was recognized by the powerful royal. Henry Fitzroy was the product of the monarch's relationship with his mistress Elizabeth Blount, who was a lady-in-waiting to the king's wife, Catherine of Aragon. Born in 1519, Henry had titles and honors heaped on him by his father, for whom a male heir was an important asset. By all accounts, the king was fond of the boy and was shattered when young Henry became ill with "consumption," likely tuberculosis, and died at 17.

His marriage to Catherine of Braganza was childless, but King Charles II of England fathered many kids out of wedlock with multiple mistresses. Some, like James Scott, First Duke of Monmouth, made successful claims to the throne. But because of their illegitimacy, after Charles's death in 1685, his brother James, Duke of York, became king. Fun fact: Princess Diana was descended from two of the king's illegitimate sons: Henry Fitzroy and Charles Lennox.

King Richard I, known as Richard the Lionheart for his bravery as a warrior and military leadership, ruled England from 1189 to 1199. He had no children with his wife, Berengaria of Navarre, but fathered a son, Philip of Cognac, with a woman who has never been identified. Philip was the inspiration for the character Philip the Bast*** in Shakespeare's play "The Life and Death of King John." 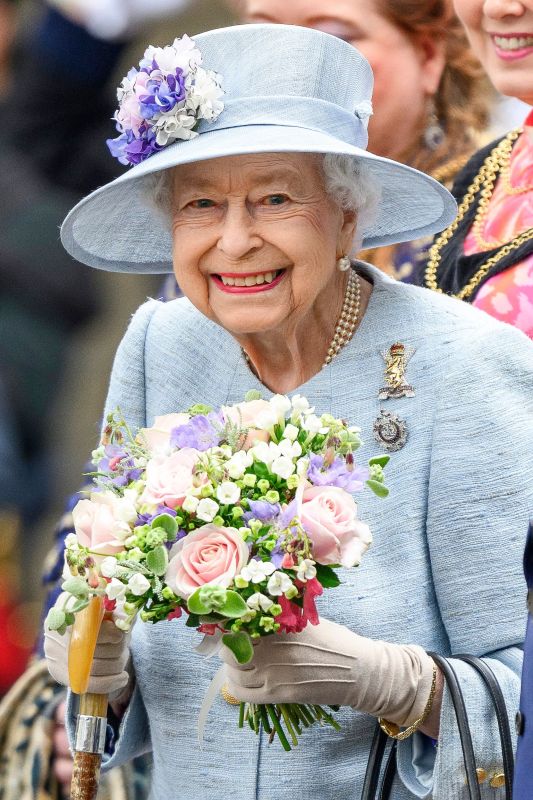 Up Next Royals in Scotland