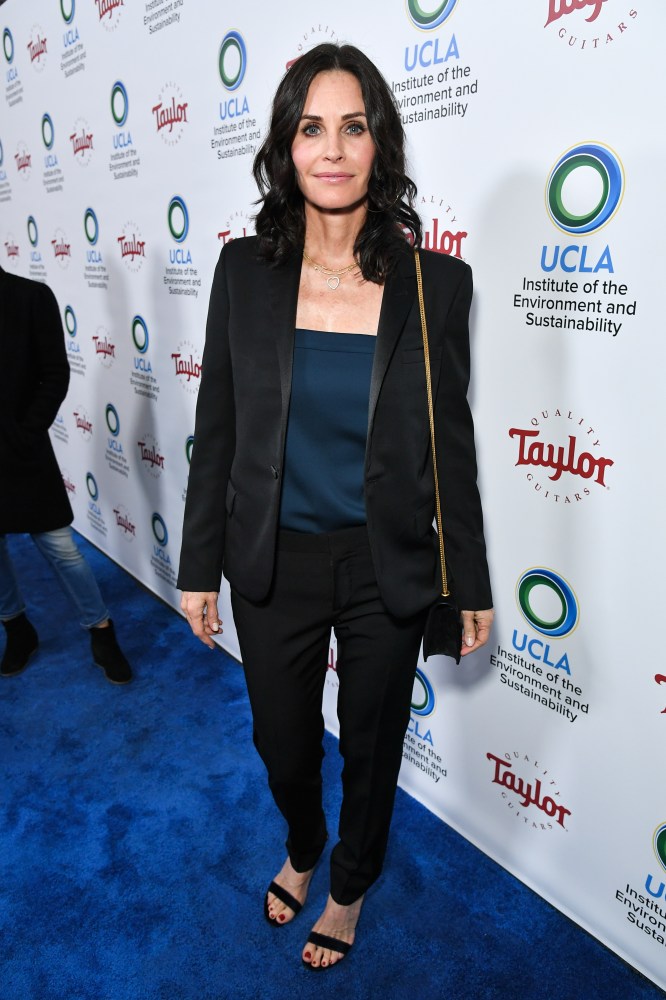 Last month, Gossip Cop busted Life & Style for falsely claiming that Jennifer Aniston was furious with Cox for still hanging out with Justin Theroux. The magazine maintained that Aniston was no longer speaking to her longtime pal, but the outlet provided zero evidence indicating that Cox and Theroux have been in touch. Not only did Aniston's rep assure us the story was untrue, but around the same time it was published, Cox supported Aniston at the premiere of her new Netflix movie Dumplin'. There's simply no rift between the two actresses.

Last November, Gossip Cop called out Star for wrongly reporting that Cox was refusing to marry boyfriend Johnny McDaid unless he signed a prenup. The outlet said the couple were battling over the situation and could be headed for a split if the Snow Patrol rocker didn't agree to the prenup. A source close to the actress, speaking on the condition of anonymity, assured us the story was made-up. Around the same time, Cox opened up about her romance with McDaid in an interview, saying, "We're not married. I'm married in my heart." The actress further suggested that the formality of marriage isn't important to her, noting that the term "husband" is just "a label." It's unclear if that means the actress never intends to walk down the aisle, but she had no plans to do so in November. Cox and McDaid are still together, and obviously never fought over a prenup.

Also last November, Gossip Cop debunked an OK! story claiming Cox was feuding with former "Cougar Town" co-star Busy Philipps. The magazine claimed Cox was slated to appear on Philipps' new E! talk show, "Busy Tonight," but the host bumped her in favor of having younger stars on the show. Separate sources close to both actresses assured us they're still friends and there was no truth to the story. Meanwhile, an E! insider confirmed that Cox was never scheduled to appear on the talk show in the first place.

Gossip Cop busted NW last September for falsely claiming that Cox and Aniston rejected Lisa Kudrow's idea for a "Friends" reunion. According to the magazine, Kudrow pitched a reboot with "just the women," but her co-stars dismissed the idea. Not only did several different sources assure us the story was nonsense, but Kudrow herself said in 2017 "Today" show interview that a "Friends" reunion wouldn't work. "The thing we liked best about the show was that they were 20-somethings and they were their own family. Now, they all have families, so what are we going to watch?" said the actress. Kudrow stuck by that opinion in an interview on "Conan" last year, explaining that the classic sitcom "isn't about people in their 40s, 50s and if we have the same problems, that's just sad." Simply put, Cox and Aniston never turned down their former co-star's nonexistent idea for a reunion.

And finally, Gossip Cop called out OK! last July for falsely alleging that Cox was battling with ex-husband David Arquette over raising their 14-year-old daughter Coco. The tabloid claimed the young girl was "sick" of her mom being a "control freak," so her dad stepped in and told his ex to give their daughter "more freedom." In reality, Cox and her daughter spoke about their close bond in an interview with People magazine last year. The outlet even noted that the actress is "not super strict," while Coco praised her mom for helping to "contain my stress and make me feel better." As for Cox's relationship with Arquette, the actress explained that they're successful co-parents who support each other and keep it "harmonious in both [homes].

Justin Bieber Tried To Run Into Selena Gomez While Hiking?

Katie Holmes Marrying Jamie Foxx After He Won Over Her Parents?