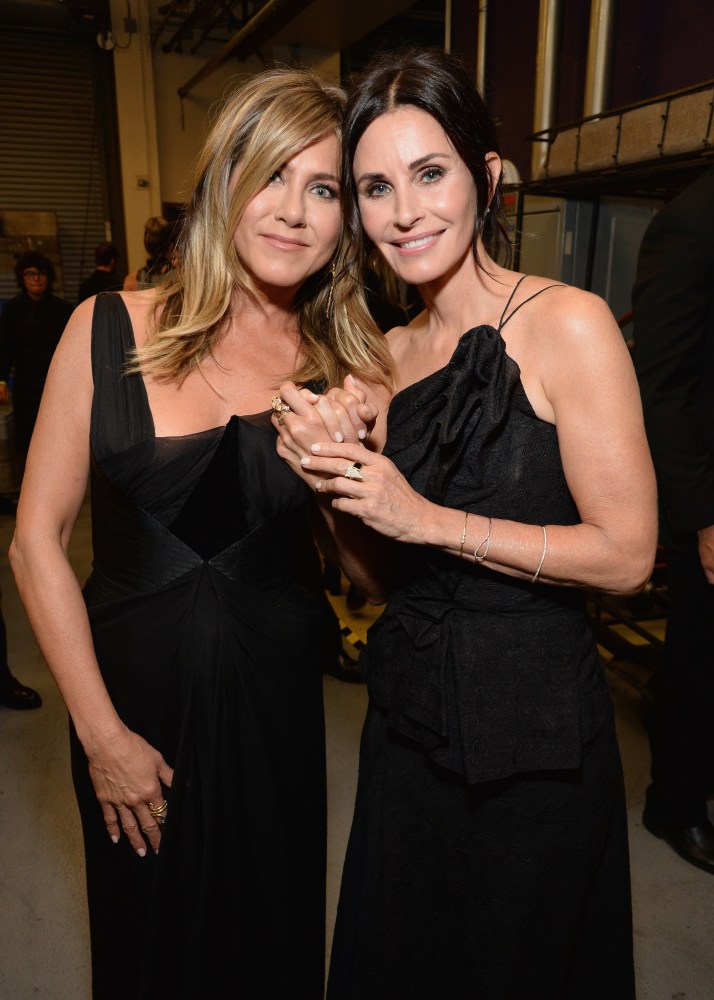 In September, Gossip Cop busted In Touch for falsely claiming that Aniston was furious with Cox for keeping in touch with her estranged husband Justin Theroux. The tabloid said that Cox secretly met with the actor for dinner in New York City, and Aniston went "into a tailspin" when she found out. The outlet failed to mention when and where Cox and Theroux's supposed get-together even took place. The idea that Aniston would be upset didn't make much sense either, considering Theroux said in a recent New York Times profile that they're on good terms. Regardless, Aniston's rep told us on the record that the story was made-up.

Also in September, Gossip Cop debunked an NW story claiming Aniston and Cox rejected Lisa Kudrow's pitch for a "Friends" reunion. The outlet said that Kudrow wanted to return for a show with "just the women," but her female co-stars dismissed the idea. However, Kudrow said in 2017 "Today" show interview that a "Friends" reunion wouldn't work. "The thing we liked best about the show was that they were 20-somethings and they were their own family. Now, they all have families, so what are we going to watch?" said the actress. Kudrow expressed a similar sentiment in an interview on "Conan" earlier this year, explaining that a "Friends" reboot isn't a good idea because "the show isn't about people in their 40s, 50s and if we have the same problems, that's just sad." Aniston and Cox never rejected their former co-star's nonexistent pitch.

Gossip Cop called out the National Enquirer in July for falsely claiming that Aniston was overheard in public telling Cox that she should have never married Theroux. The magazine said the pals shared a "heart-to-heart in a hotel lobby in West Hollywood," but failed to mention the name of the hotel and when the supposed incident occurred. The outlet further contended that Aniston was heard calling her estranged husband "a monster." Of course, it's highly unlikely the two women would have an intimate conversation in a public place, and even more unlikely that Aniston would bad-mouth Theroux in front of bystanders. Regardless, a rep for the actress told us on the record that the story was nonsense.

In June, Gossip Cop debunked a Closer article about Aniston asking Cox to set her up on dates. The magazine added that Cox was thrilled to help her friend find love again. Around the same time the phony story was published, People magazine reported that Aniston is "very happy being single." As recently as September, the outlet confirmed the actress wasn't back on the dating scene yet, saying that Aniston "isn't concerned about dating" and "is happy to focus on work."

And finally, Gossip Cop busted HollywoodLife in March for making up a story about Cox urging Aniston not to reunite with Brad Pitt. Of course, the actress never had any intention of reconciling with her ex-husband in the first place. People magazine reported at the time that Aniston and Pitt "haven't seen each other in ages" and had no intention of reuniting. Cox, who's one of Aniston's closest friends, would be well aware of that. The story was a complete work of fiction.