Celine Dion has not recently had plastic surgery that's left her looking like a "disaster," despite a new tabloid report. Gossip Cop can correct this claim, which is based entirely on speculation. Actually, it's clear from photos of her in July 2017 and from just two days ago that the singer looks pretty much the exact same from year to year. 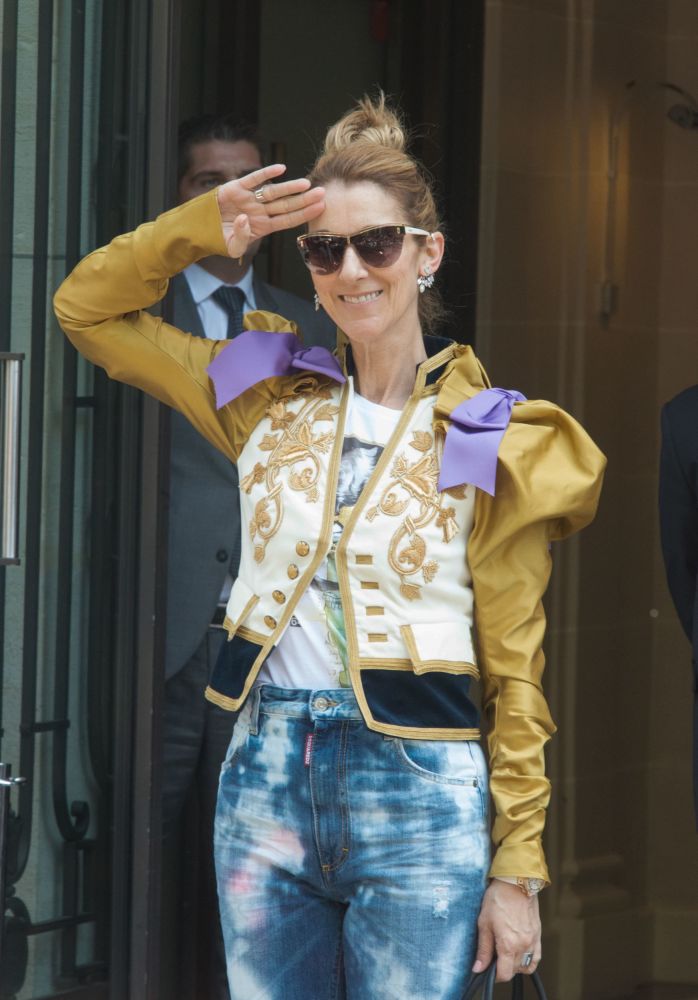 In yet another article designed to be sensational, the National Enquirer maintains Dion has "reportedly undergone extreme facial fixes that… have backfired badly." The publication further contends she looks "terrible" and "totally different from just a year ago." Not surprisingly the magazine doesn't mention where it's been "reportedly" asserted she's had plastic surgery that made he look like a "disaster." In fact, a search online appears that the supermarket tabloid itself is the one that started the false rumor.

After noting how Dion lost her husband and manager Rene Angelil in 2016, an unnamed "source" is quoted as gratuitously saying, "She totally lost her looks" afterwards and is "unrecognizable." The same unidentified and untraceable "source" asserts, "The word is she went under the knife to try and give herself a fresh start… It clearly hasn't turned out very well." Again, "the word" from where? Who's making these allegations?

The magazine follows its practice of quoting anonymous sources using vague general terms, such as "reportedly" and "the word is," with another tabloid trick, having a doctor who's never treated the subject of the story offer his or her opinion, based on photos that the magazine chose. Alongside an unflattering picture of Dion dressed down and signing an autograph, the plastic surgeon named Dave David offers that he believes she had Botox, but feels, "She looks terrible, haggard and homely." And even though he shares how he thinks the Grammy winner looks "homely" and "terrible" from possible cosmetic work, Dr. Dave David adds, "her teeth look better," "now she has a chiseled chin," and overall "looks like a completely different person."

To recap: The tabloid says Dion "reportedly" has "extreme facial" plastic surgery and it came out a "disaster." To support its claim, the magazine then has a doctor, who's never been within 25 feet of the singer, look at less than flattering images of her and declare she looks "terrible." And then a few sentences later, the same plastic surgeon seemingly praises the cosmetic work he thinks she may have done. Lastly, Dr. Dave David announces she "looks like a completely different person" from last year.

Now let's look at two Getty Images (below) of Dion. The photo on the left is from when she played the Allianz Riviera Stadium in Nice, France on July 20, 2017. The picture on the right is from her concert at the Qudos Bank Arena in Sydney, Australia this past Friday, exactly 53 weeks after the first shot was taken. You'll notice Dion looks not "completely different," but virtually exactly the same.

Dion's rep not only assures Gossip Cop the article is untrue, but she even told the tabloid on the record that the performer hasn't had any new cosmetic work done, and yet the magazine still dismissed the spokesperson's remarks, which in this instance double for reality. Instead, the often disproven publication decided to ends its piece with its unnamed and possibly nonexistent "insider" taking a cheap shot, alleging the singer had plastic surgery and relating how it "backfired and ended in total disaster." But even if you disregard the rep's comments or Dion herself saying she wouldn't do Botox or anything that might affect her performances, just based on the photos above of her, it's clear the only thing that "backfired" and is a "disaster" is the Enquirer's article.

Of course, the outlet doesn't have a stellar record when reporting about the singer. A couple of years ago, Gossip Cop busted the same magazine when it swore up and down Dion was dating her guitarist Kevin Girouard. That was a total falsehood, as is the latest claim. The only surgery she's had recently was on her ears. In March, Dion posted on Facebook that she had to cancel a concert in Las Vegas because she underwent a minimally invasive procedure in her middle ear that affected her hearing and singing.