The romance between Halle Berry and singer-songwriter Van Hunt is most definitely still going strong. In honor of Van's 51st birthday on Monday, March 8, Halle, 54, shared a photo and a pair of videos of the couple in super PDA mode. One of the clips showed the two snuggling up to one another as Van sang, "We're in heaven you know it's true, I love me and you love me too," to Halle, who returned the love with a giggle and a peck on the cheek. "A real woman can do it all by herself, but a real MAN won't let her," Halle captioned the post. "Happy birthday VanO. I only wish I'd known you sooner so I could have loved you longer!❤️," she added. Janelle Monae, Mario Lopez and more of the pair's famous friends chimed in to praise Halle's sentiment and the couple's general adorableness before the birthday boy himself responded to the post in the comments with a cheeky note of his own. "Thank you, Bb. these r beautiful words," he wrote. "i love you and i'm so glad that bday spanx r still a thing 😲."

Katie Couric admits she was 'nervous' about hosting 'Jeopardy!'

Katie Couric has plenty of experience asking tough questions on-camera. Asking tough answers, however, is another story for the veteran journalist, whose two-week "Jeopardy!" guest hosting tenure kicks this week. "Of course I was nervous, are you kidding me?" she says in a Q&A the show shared to YouTube on Sunday, March 7. "The last thing I wanted to do was come here and mess up and embarrass the show." Despite initial concern she may have turned off some of the show's devoted following with recent comments she made about Donald Trump, Katie found she had little to worry about ahead of her debut on Monday. "The thing is, everyone here takes such good care of you and it was such a relief to know that they weren't going to let me look stupid and they were going to have my back and help me out," Katie said, adding that she studied Alex Trebek's approach as host carefully before setting foot on the "Jeopardy!" stage. "I love the show, I loved Alex Trebek. I was so inspired by him, especially by his courage toward the end of his life," Katie shared. Her debut on the beloved trivia show marks the first time a woman has ever been its host — it also begins on International Women's Day. Asked what she hopes little girls who may be watching will take away from the show, Katie said, "It's cool to be smart."

Bruno Mars and Anderson .Paak beg for a Grammys gig on Twitter

Pretty please?! After a year of pandemic lockdowns killed touring plans for most artists, Bruno Mars is desperate to get back onstage with his new Andeson .Paak project, Silk Sonic. So desperate, in fact, that the 11-time Grammy winner is openly petitioning the Recording Academy for a gig at next weekend's Grammy Awards. "Dear Grammys," Bruno wrote on Twitter on Sunday, March 7, after Anderson begged Bruno and everyone on Twitter to put some pressure on the Recording Academy ("I haven't seen my family in months!! I need this to work, You promised me!!" Anderson tweeted at Bruno, urging "everybody" to "join in" and "#LetSilkSonicThrive.") "If you can see it in your hearts to allow two out of work musicians to perform at your show, we would really appreciate it. We just released a song and could really use the promotion right now," Bruno continued, referring to the duo's new track, "Leave the Door Open." "We have a lot riding on this record (and the Pelicans game next week, but that's another story)," he joked. "We haven't been able to perform for a while and we just want to sing. We'll send in an audition tape and take as many covid tests as we need to. I promise we won't be extra. We just really want to gig again." He added that he hopes the Recording Academy will "consider this opportunity and let us shine again," signing off, "Love, Silk Sonic." This year's Grammy Awards airs Sunday, March 14, with performances by Taylor Swift, Meghan Thee Stallion, BTS, Harry Styles and more.

With awards in six categories including Best Picture, Best Director (Chloe Zhao) and Best Actress (Frances McDormand), "Nomadland" came out as the big winner at the 2021 Critics Choice Awards. But there were heartwarming moments throughout the mixed in-person and virtual ceremony on Sunday, March 7, including a sweet shout-out from "Ted Lasso" star Jason Sudeikis to his ex, Olivia Wilde, and a tear-inducing acceptance speech from Taylor Simone Ledward, who picked up the Best Actor award for her late husband, "Ma Rainey's Black Bottom" star, Chadwick Boseman. Jason opened by joking about his long-winded speech at the Golden Globes last weekend ("Where do I start? More importantly, where do I end?" he quipped), then credited his former partner for her role in getting "Ted Lasso" off the ground. "I want to thank my kids, Otis and Daisy. I want to thank their mom, Olivia, who had the initial idea to do this as a TV show," Jason said, per USA Today. Later, a visibly emotional Taylor honored the memory of her husband, who died after a secret battle with colon cancer last year. "He would talk about the importance of Black voices, telling Black stories," Taylor said, sharing what Chadwick might have talked about had he been there to receive the award. Addressing him directly, she promised, "I know that the seeds you planted will grow into forests."

Bethenny Frankel is rethinking the pointed criticism she aimed at Duchess Meghan ahead of the Sussexes' interview with Oprah Winfrey over the weekend. After the revelatory sit-down aired on Sunday, March 7, Bethenny hopped on Twitter to share a post-op reflection on Meghan's story, which included bombshells about members of the royal family allegedly expressing concern over the color of Meghan and Prince Harry's future child's skin, and essentially barring the former "Suits" star from seeking medical treatment for the severe depression she developed after joining the family. "I watched M & H sit down," Bethenny tweeted after posting a series of caustic comments suggesting that while Harry deserved empathy, Meghan did not. "Emotional distress & racism must feel suffocating & powerless," Bethenny continued. "I'm a polarizing, unfiltered(often to a fault)flawed person w a voice. When I heard of the interview, during a pandemic, it felt like a surprising choice. I'm sorry if it hurt or offended you." The apology didn't exactly win over Bethenny's fellow Twitter users. "That's a weak apology," one person responded.
"You can't possibly know what it's like to be a mixed race woman in this time nor the first to marry into the royal family. You are discounting your apology by saying 'if I offended you', you were a poor advocate. Own it." Said another: "Hope you heard the part when they said they aren't getting paid for the interview since that seemed to be an issue for you."

Priyanka Chopra set to open an Indian restaurant in NYC

Priyanka Chopra Jonas is revisiting her roots via the restaurant business. Over the weekend, the actress, 38, announced plans to open a French brasserie-inspired Indian eatery in New York City in late March. "SONA is the very embodiment of timeless India and the flavours I grew up with," Priyanka shared on Instagram alongside photos of her team — along with husband, Nick Jonas — performing a "puja" or "prayer ceremony … to bless the space" back in 2019. She went on to praise SONA's head chef, Hari Nayak, and the "delicious and innovative menu" he's created for the restaurant, which Priyanka says will take diners "on a food journey through my amazing country." In addition to launching her new eatery, Priyanka recently released a Hindi translation of her new memoir, "Unfinished." She's due to return to the big screen later this year opposite Keanu Reeves in "Matrix 4."

Kanye West's latest Yeezys sold out in one minute

Between his divorce from Kim Kardashian West and a new FEC inquiry over possible campaign ethics violations, Kanye West was probably ready for some good news by Saturday, March 6 — and that's just what he got, courtesy of his latest Yeezy launch. According to TMZ, the rapper turned designer's new Yeezy 450 "Cloud White" kicks launched at 9 a.m. Eastern on Saturday. By 9:01 a.m., they were completely sold out, in spite of the flack Kanye's caught for the show's unorthodox wavy design. In addition to his Yeezy brand, Kanye's reportedly working on an apparel line for the Gap that's expected to launch this spring or summer, according to Bloomberg. The design news comes just a few weeks after a source told Us Weekly Kanye's "been trying to throw himself into work" since his split from Kim.

Hilaria Baldwin's habit of veering between an American and a Spanish accent may have caused an uproar on Twitter, but for Gillian Anderson, the fact she has two distinct accents is "old news." Ahead of the Critics Choice Awards over the weekend, Gillian — who moved to London from Chicago with her family at age 5 then moved to Michigan at 11 — was asked about a comment Alec Baldwin made regarding her British and American accents. "I don't have social media on my phone so I wasn't [aware]," Gillian told ET when the outlet filled her in on Alec's reference to her while defending Hilaria. "A couple people texted to say that something was going on. I didn't pay any attention to it because it's just something that I live," she explained. "I grew up between two countries and so depending on who is in my ear is which direction my accent goes. So I'm so used to it that it's kind of old news for me."

Paul Walker's daughter, Meadow Walker, made her runway debut over the weekend at Paris Fashion Week. "Exclusive Debut. Opening Givenchy FW21," the 22-year-old wrote on Instagram, sharing a video from her Givenchy runway show. "Thank you Matt for your complete support and determination to safely get me to Paris from NY. Congratulations on your first Givenchy show @matthewmwilliams! Grazie mille @pg_dmcasting. Thank you to everyone involved. Endless gratitude and love for you all," she added. Since Meadow's dad died in 2013, she's remained close with his "Fast & Furious" costar, Vin Diesel, as well as Vin's kids, who she referred to as "family" in a selfie they all posed for last June. 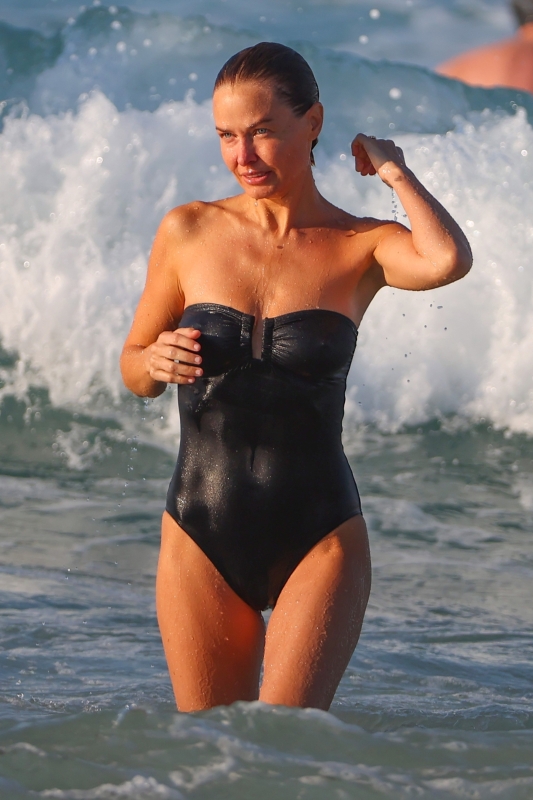