With temperatures soaring, it's only fair that Hollywood keeps things just as hot! Summer 2018 has been full of fabulous television offerings and blockbuster flicks, and Wonderwall.com is rounding up the best looking stars in the bunch! First up is the resident hunk from "Crazy Rich Asians," Henry Golding! We're counting down the days until the movie hits theaters on Aug. 15… and we'd be lying if we didn't admit it's mainly because of Henry! The gorgeous British-Malaysian actor started his career as a travel host, making him a newcomer to both the big screen and our crush list. Keep reading for even more movie and TV eye candy this season…

An excuse to stare at Ruby Rose for a couple hours? Sign us up! The stunning star hits the big screen in the science-fiction horror flick "The Meg" on Aug. 10 and we can't wait to see her continue to refine her acting chops alongside fellow summer hotties Jason Statham and Li Bingbing.

Would the summer movie season be complete without Dwayne Johnson? We certainly don't think so! One of our very favorite film hunks stars in the nail-biting thriller "Skyscraper," which hit theaters on July 13 and quickly dominated at the box office. Want more than just a couple hours at the movies with The Rock this summer? You're in luck! He's also back in your living room with Season 4 of "Ballers" beginning Aug. 12.

Rihanna is one of the hottest stars of every season, but this summer, she blessed the big screen with her presence in "Ocean's 8." The girl-power flick hit theaters on June 8 with Rihanna starring as hacker Nine Ball alongside other smart, stunning ladies like Sandra Bullock, Cate Blanchett and Sarah Paulson.

We've got a whole lot to thank Netflix for, and now we can add Jacob Elordi to the list! The hunky 21-year-old Australian stars in the streaming service's runaway summer hit "The Kissing Booth" as tall, dark and handsome hottie Noah Flynn. Making this movie even sweeter? He's dating on-screen love Joey King in real life too!

Freeform brought us our new favorite Marvel installment, "Cloak & Dagger," which also introduced us to the adorable Olivia Holt. Though the blonde beauty has been a Disney darling for years, "Cloak & Dagger" marks her move to teen-targeted content. She stars as Tandy Bowen, aka Dagger, on the show, which debuted in June to rave reviews.

We tried to pick the cutest of the bunch, but we have to go with all five! The men of "Queer Eye" blessed our eyeballs by returning for Season 2 of their hit Netflix show this summer, and we're thanking our lucky stars for everything about them — from Jonathan Van Ness' luscious hair to Antoni Porowski's uncanny resemblance to John Mayer.

Zoey Deutch stars as Harper in June's Netflix hit "Set It Up." The romantic comedy features Zoey's character working as an assistant intent on setting up her demanding boss with another overworked assistant's intense boss so the underlings can get a break. The 23 year old started acting at age 15 but has been around Hollywood since birth! Her mom is actress Lea Thompson and her dad is director Howard Deutch.

Considering we've had a crush on the man behind "The Office" character Jim Halpert for over a decade, adding John Krasinski to this list was a cinch! The fact that he's taking on an action role this summer and stepping into the shoes of Tom Clancy's iconic character Jack Ryan? This one's a slam dunk! John stars as the titular reluctant hero on Amazon's "Tom Clancy's Jack Ryan" drama series beginning on Aug. 31, and we are counting down the days!

Nina Dobrev is back on the big screen on Aug. 10 in the comedy "Dog Days," which also features adorable pups and stars like Vanessa Hudgens and Finn Wolfhard. "Dog Days" marks Nina's first film of 2018, but she already starred in one of the summer's hottest music videos: She reprised her role as Mia in "Degrassi" for Drake's "I'm Upset" video.

Josh or Charles? Well, we've picked sides here at Wonderwall.com! One of our favorite shows, "Younger," returned in June for its fifth season and thankfully, Peter Hermann reprised his role as our favorite hunky boss, Charles Brooks.

To keep things fair, for those on Team Josh, we've also added Nico Tortorella to the list (despite his horrific taste in clothes IRL). The younger "Younger" hunk is certainly drool-worthy as sweet tattoo artist Josh on the hit TV Land show.

One of our favorite girl crushes is back! Mila Kunis returns to the big screen with "The Spy Who Dumped Me" on Aug. 3. The beauty, who's a busy mom of two off-screen, pairs up with the hilarious (and gorgeous) Kate McKinnon for this action-comedy flick that follows her character, Audrey, on a thrilling adventure after she discovers her ex is actually a CIA agent.

"Luke Cage" is back! Season 2 debuted in June and we've welcomed Mike Colter back to our screens every episode since. The Netflix series brings another part of the Marvel universe to life, for which we are very thankful!

Amy Adams on the small screen? The award-winning actress spent the summer starring in HBO's miniseries "Sharp Objects," which is based on the popular Gillian Flynn novel. Amy made the move back to TV alongside Patricia Clarkson and Chris Messina on the show that currently holds a 96 percent fresh rating from critics on Rotten Tomatoes.

A Paul Rudd crush never goes out of style! (No, really, he's barely aged since "Clueless" 23 years ago!) So Paul Rudd as a summertime action hero? Well, that's just what the doctor ordered! The cute actor returned to the big screen as Ant-Man on July 6 with "Ant-Man and the Wasp," this time alongside the beautiful (and butt-kicking) Evangeline Lilly.

Chris Pratt the action star never gets old, so when "Jurassic World: Fallen Kingdom" hit theaters on June 22, we were the first ones in line! He reprised his role as Owen Grady, the Navy vet who's on a mission to help capture Velociraptor Blue.

We are eagerly anticipating the third-season premiere of HBO's "Insecure" on Aug. 12 because we have been missing its hot and hilarious star and creator, Issa Rae. We also can't wait to catch her on the big screen this fall in "The Hate U Give."

We have two words for you: Henry Cavill. The beautiful Brit with the impossibly chiseled jawline takes on a bad-boy role as a CIA operative in the latest "Mission: Impossible" offering, "Mission: Impossible – Fallout," which hits theaters July 27. If staring at hunky Henry isn't enough, this Tom Cruise flick is already garnering buzz branding it the best in the franchise.

Jennifer Lopez on our TV screens? To what do we owe the honor? Why, it's the third and final season of her hit NBC show "Shades of Blue," of course! J.Lo turned down the glam factor to suit up as Detective Harlee Santos for the cop drama, which kicked off this June. Anything that gives us more time to gawk at Ms. Lopez in action is a good thing in our book!

Hulu, represent! The streaming service's new series "Castle Rock" starts on July 25 and among its eye candy? The handsome Andre Holland, who takes on the role of death-row attorney Henry Deaver.

"Mamma Mia! Here We Go Again" is jam-packed with big, pretty stars, but our favorite of the bunch? Lily James! She takes on the role of young Donna, and anyone playing a young Meryl Streep is cool with us! And bonus — the British beauty even shows off her singing chops in the Abba-filled flick!

We'd be remiss not to include one of the "GLOW" ladies! The Netflix show returned for its second season on June 29, and Alison Brie again captivates the screen with her portrayal of Ruth "Zoya the Destroya" Wilder. 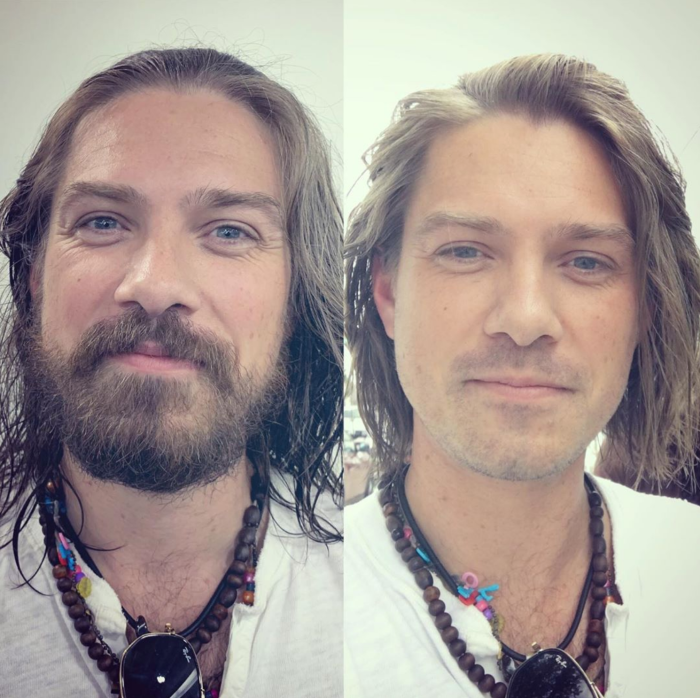