A tabloid claims Jessica Simpson's weight loss goals are causing problems in her marriage to Eric Johnson. Gossip Cop can exclusively debunk the story. The singer's rep assures us it's 100 percent false. 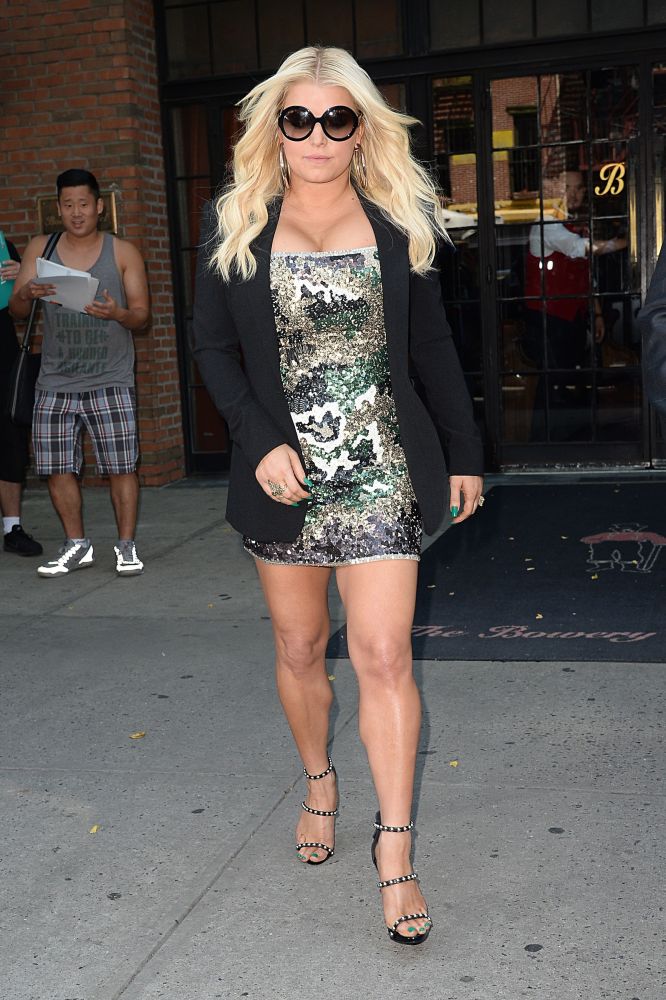 A headline in the latest issue of OK! reads, "Eric Begs Jessica: Slow Down!" The magazine says that following the birth of her third child, Simpson is desperate to regain her pre-baby body for swimsuit season. A supposed insider contends that singer wants to lose 70 pounds and has become obsessed with working out, but her husband is growing frustrated with her fitness fixation.

The so-called "source" adds, "He never sees her anymore. She's either locked up in the gym or out on a four-hour run." The suspicious tipster continues, "Eric wants her to relax – he misses their date nights but she doesn't want to ditch her diet to have a few drinks or eat out. She tells him, just another month or two, and it'll all be worth it."

The outlet's story seems to have been concocted simply Simpson recently opened up to People magazine about getting back into shape after having her third child. Although the singer noted that she's been eating healthier and exercising, Simpson's spokesperson assures us she's not neglecting her marriage to lose weight.

"Jessica is working hard to get in shape and feel good and be her healthiest, but she is not on any crash diet or crazy work-out regiment," says a rep qualified to speak on the singer's behalf. "Eric is, as always, 100 percent in support of Jess – and they even work out together a lot." The happy spouses also exercised together following the births of their older children, Maxwell and Ace.

It should be noted, this isn't the first time Gossip Cop has busted a tabloid for running a false story about the singer's body and marriage. During her third pregnancy, Star wrongly reported that Simpson couldn't "stop eating." The story was just a cheap attempt at exploiting the singer's pregnancy weight gain, which is par for the course when carrying a child.

Gossip Cop also busted NW for falsely claiming Simpson would be getting plastic surgery after the birth of her third baby, going as far to say she wanted "a butt like Jennifer Lopez and Jessica Alba's abs." In Touch then wrongly alleged that Simpson was so upset about her pregnancy weight gain that it was negatively impacting her marriage. The singer's weight and marriage are clearly two topics that the tabloids love to target with phony reports.

How Did Tom Cruise React To Katie Holmes And Nicole Kidman Both Being Pregnant?