Justin Timberlake and Jessica Biel are not expecting a second baby as of now, despite a new tabloid report. Gossip Cop can correct the speculative story. It appears the actress herself has inadvertently debunked a magazine's claim that she's pregnant again. 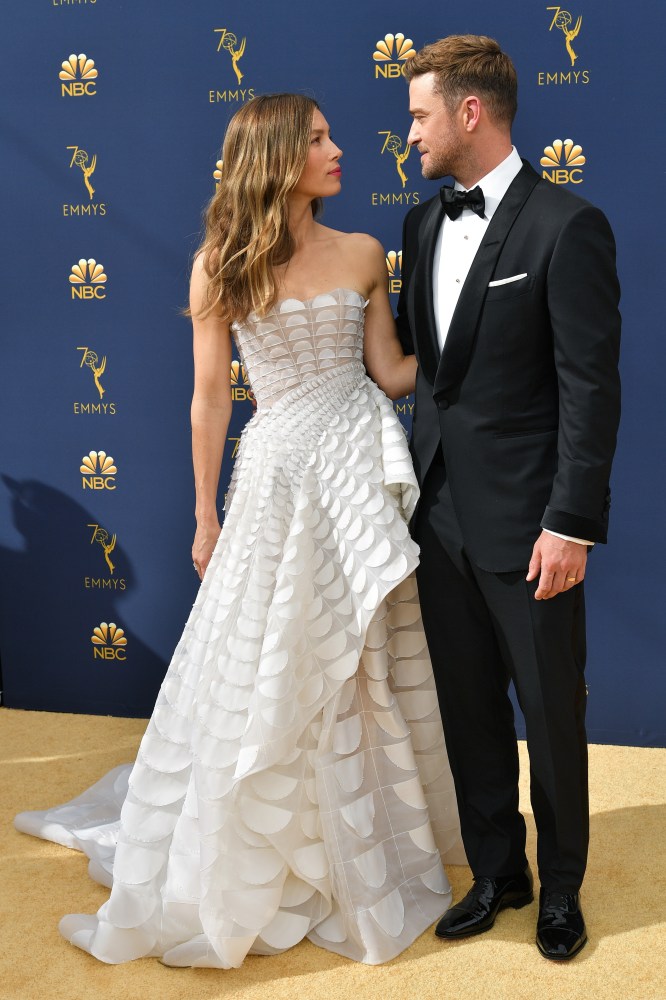 On the cover of this week's OK!, the publication teases, "Justin & Jessica: Surprise Baby!" The article maintains Timberlake was particularly "attentive" to and "doting" on his wife at the Emmy Awards two weeks ago because "the stars are holding onto a very special secret." According to the outlet, the parents of 3-year-old Silas are "expecting their second child."

To make its premise seem credible, the tabloid quotes a so-called "source" as saying, "Justin and Jessica have been thinking about having another baby for a while." The same untraceable and possibly made-up "friend" adds how Biel "loves Silas so much, and the thought of having another child just like him got her excited." Next, the magazine's unidentifiable tipster asserts Silas has been "asking for a sibling and even patted Jessica's belly once and asked if there was a baby inside." "They love being parents… A second baby would truly be a blessing," concludes the outlet's ill-informed or concocted "source."

Indeed this would be a "surprise baby" for Timberlake and Biel because she's not pregnant. Among the many tip-offs that the article is manufactured are its quotes. They appear to be very vague on purpose to give the impression Biel is expecting without definitively saying so.

But rather than what the publication is trying to float, let's look at what Biel herself has recently done and said. Two days before the Emmys, Biel posted a video on Instagram of her looking svelte and doing a hard workout with weights. Then, hours before the awards show, the actress posted a photo of her with Timberlake all dressed up but looking glum. The accompanying caption read, "Our faces when we learned there's no booze at the #Emmys." But clearly following the ceremony, at which she lost the award for Best Movie/Limited Series Actress, the couple found alcohol because Biel shared a picture on Instagram of her looking worse for the wear, with the message, "Portrait of a hungover woman who had cake for breakfast."

Obviously, if Biel were pregnant, she wouldn't be as thin as she appears while working out or getting drunk. A source close to the actress tells Gossip Cop on condition of anonymity that the magazine's story is "wrong." We have also reached out to her and Timberlake's reps.

It should be noted that OK! has a poor record when reporting about the couple. Practically one year ago to the date, Gossip Cop busted the magazine when it ran an untrue cover story that contended Timberlake and Biel were getting a $300 million divorce. That wasn't true and neither is its current "surprise" second baby article.

Did Jessica Simpson Almost Get Divorced Over Her Drinking?