Kristen Bell served as the very first host of the Screen Actors Guild Awards on Sunday. Check out her opening monologue from the SAG Awards in the video below! 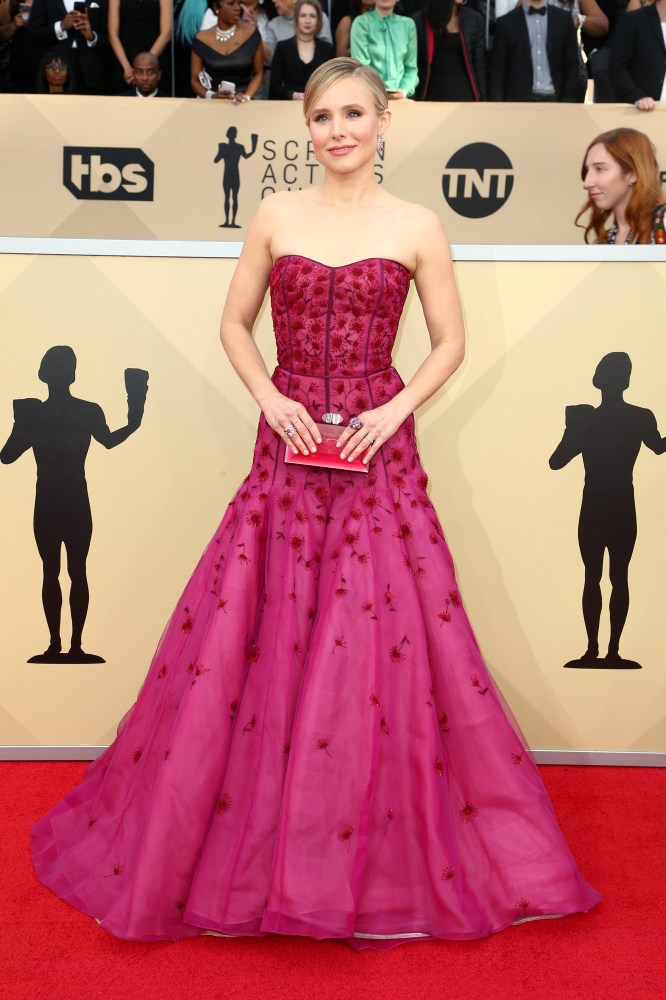 As always, the ceremony kicked off with stars giving "I Am An Actor" introductions. This year's participants were notably all female: Allison Janney, Tracee Ellis Ross, Millie Bobby Brown and then Bell herself. Launching into her monologue, Bell pointed out "there has never been a host for the award show before," making her the "first lady." She joked, "I honestly never thought I would grow up to be the first lady but I kinda like it."

Then, in a nod to the real First lady, Melania Trump, Bell said her platform would be cyber-bullying." She cracked, "I have yet to see any progress on that problem just yet, and I'm looking at you, Tony Hale!" She then gave shout-outs to the casts of "Glow" and Get Out, along with Elisabeth Moss from the "documentary," "The Handmaid's Tale." She noted the evening is "for actors, by actors but it is not just the one's in this room," amusingly adding, "It is especially for the ones that have just gone on their 20th fruitless commercial audition."

More seriously, Bell stated, "It's a true privilege to experience and share the wide scope of humanity through storytelling… Everyone's story deserves to be told, especially now. We are living in a watershed moment and as we march forward… let's make sure we're leading the charge with empathy and diligence, because fear and anger never win the race. And most importantly, regardless of our differences, I think we can come together and delight in one thing: Frozen 2 is coming out in theaters in 2019."

In December, Bell was named the first-ever host of the SAG Awards. She was selected to emcee the ceremony amid the growing #MeToo movement, along with calls for equality in the workplace. In a recent interview with Entertainment Tonight, the actress said women would be taking "center stage" at the 24th annual awards show, particularly as only females were chosen to be presenters.

"This is a bit of a blank slate because no one has ever done it before, so we're gonna have some fun, but there's a lot of ladies involved," she shared. "[We're] really celebrating and honoring every one of the actors, but we're letting the women take center stage and attempt to balance the conversation a little bit. This might be ladies' night."

And just days before the big gig, Bell told Jimmy Kimmel during an appearance on the late night show, "I'm a woman. My genitalia is irrelevant. It's not the first female host. It's the first host. I thought that was kinda cool." She added, "I've sort of come to terms with the fact that I'm not going to please everyone, but I feel confident in that I can bring joy, which I feel like we need a little bit of right now and forward momentum."

Based on the laughs from the star-studded crowd, it seems like Bell brought plenty of joy to the room. Gossip Cop will have full video of her opening monologue at the SAG Awards momentarily. Stay tuned!