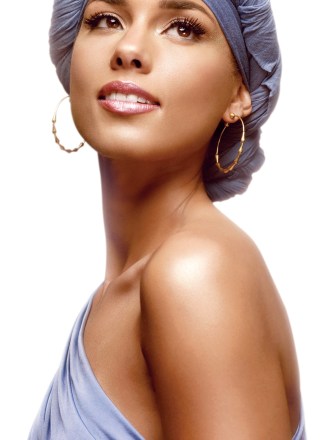 Share Tweet Pin Email
This Hell's Kitchen girl was on fire long before she released an album with that title in 2012. She was singled out in preschool for her musical ability, immediately started training on piano, guested on The Cosby Show at 5, found a manager at 14 and got a scholarship for Columbia University and a record deal by 16. With guidance from music mogul Clive Davis, who had previously mentored Aretha Franklin and Whitney Houston, she quit college and perfected her signature blend of R&B, hip hop and classical piano. Her debut masterpiece of neosoul, 2001's Songs In A Minor, which included the colossal hit "Fallin'," garnered five trophies at the 44th Annual Grammy Awards including Best New Artist. Her 2002 effort, The Diary Of Alicia Keys, added four more to her collection. After suffering a self-described "breakdown" from working nonstop, Keys regrouped and put out her most personal album to date, As I Am, and the No.1 power ballad "No One" in 2007, which scored two more Grammys. She branched out into publishing (book of poetry and a photo book chronicling her work with Keep A Child Alive) and acting (The Secret Life of Bees, The Nanny Diaries). Keys, who had long battled questions of her sexuality, released The Element of Freedom in 2009 around the same time that her relationship with producer/rapper Swizz Beatz went public. An expectant Keys married him July 31, 2010 and welcomed their first child, son Egypt Daoud Dean, three months later.