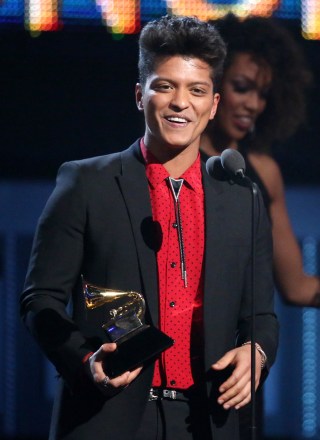 Bruno Mars has been perfecting his stage show as a toddler performing in his family's Vegas-style revue as an Elvis and Michael Jackson impersonator around Waikiki Beach. Mars, who taught himself to play drums, guitar and piano, wanted more than copycatting legends for tourists so he moved to Los Angeles after high school. Solo aspirations were put on hold when The Smeezingtons, the production team he founded with Philip Lawrence and Ari Levine, were hired to craft hits for folks like Flo Rida ("Right Round"), Travie McCoy ("Billionaire") and Cee-Lo ("F—k You"). After earning kudos for guesting on B.o.B's "Nothin' On You," he finally released his 2010 debut, Doo-Wops & Hooligans, which included multi-platinum hits "Just The Way You Are," "Grenade" and "The Lazy Song." He encountered a minor setback when he was arrested for cocaine possession in Las Vegas in 2010. He wrote "It Will Rain" for the "Twilight" soundtrack. His sophomore effort, Unorthodox Jukebox, followed in 2012 and produced even more hits like "Locked Out Of Heaven" and "Young Girls." He's collected a variety of accolades along the way including 13 Grammy nominations (and a win for Best Pop Vocal), a People's Choice Award, an American Music Award, membership in the elite club of artists who host and perform on "Saturday Night Live" and a spot on the 2011 "Time Magazine" 100 most influential people list. He's taking his pompadour, fancy footwork and feel-good melodies to the 2014 Super Bowl halftime show.