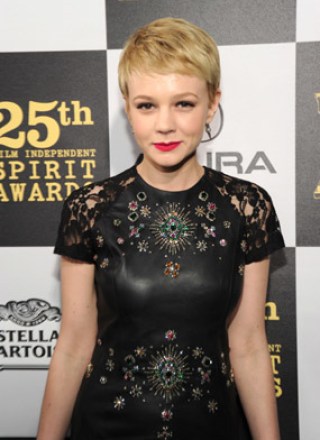 Boy do the three drama schools that rejected Carey Mulligan have egg on their faces now. Luckily, the plucky pretty young thing was persistent in her pursuit of the stage and screen and started with school productions including one that starred her brother Owen. When "Downton Abbey" creator Julian Fellows spoke at her school, she convinced the headmistress to introduce them and Fellowes must have liked what he saw in her as he introduced her to a casting agent. She made her film debut in 2005 as Kitty Bennett opposite Keira Knightly in "Pride & Prejudice" and starred in several British TV series including "Bleak House" and "Northanger Abbey". Her big breakthrough to the mainstream audience came in 2009 when she played a teen dating an older man in "An Education". The intense role earned her a Best Actress BAFTA Award as well as nominations at all of the film awards that season including an Oscar. A year earlier she had nabbed a Drama Desk Award nomination for her Broadway debut in a revival of "The Seagull". Mulligan, once linked seriously to her "Wall Street 2" costar Shia LaBeouf, married Mumford & Sons lead singer Marcus Mumford in April 2012 after a year of dating. She has ben seen in "Never Let Me Go", "Shame", "Inside Llewyn Davis" and "The Great Gatsby".