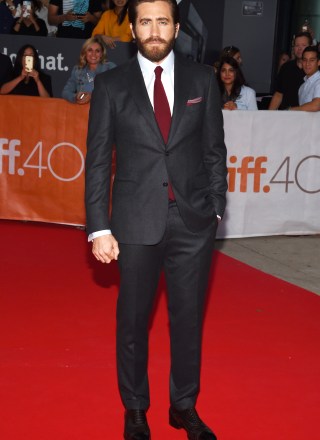 Share Tweet Pin Email
Born into a Hollywood family with a director father, screenwriter mother and scene-stealing sister, Jake Gyllenhaal was pretty much destined to give Tinseltown a try. (He even got driving lessons from family pal Paul Newman.) Thanks to his rugged good looks, sensitive baby blues and a boatload of talent, he's probably here to stay. He got his first taste of the big screen at 11 when he played Billy Crystal's son in "City Slickers." The former lifeguard and temp Columbia undergrad delivered early nuanced performances in "October Sky" (1999), "Donnie Darko" (2001), "The Good Girl" and "Moonlight Mile" (2002) In 2005, he became a bona fide above-the-title star as a marine in "Jarhead" and a cowboy who fell for Heath Ledger (whose kid is Gyllenhaal's godchild) in "Brokeback Mountain." The latter even earned him an Oscar nod. He went wild with Bear Grylls for a TV episode and when he played a L.A. cop in "End Of Watch" (2012). Currently single, the bearded babe stepped out with Taylor Swift briefly in 2010 and spent two years as Reese Witherspoon's rebound after they met on the set of "Rendition" in 2007. Prior to those pairings, he shared promise rings, adopted a German shepherd and cohabited with Kirsten Dunst.