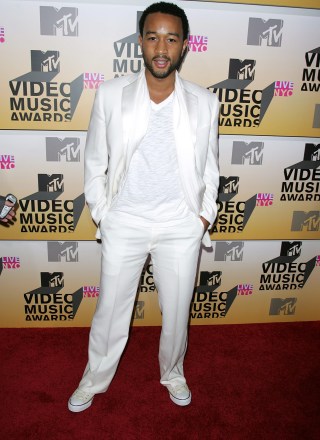 John Legend was a child prodigy whose grandmother taught him to play piano and who grew up singing in the church choir. He attended the University of Pennsylvania, where he directed an a cappella group, but after graduation he took a "real" job at the Boston Consulting Group who moonlighted in New York clubs. He became an in-demand session musician and songwriter for the likes of Alicia Keys, Janet Jackson and Kanye West before doing his own multi-platinum R&B albums. His 2004 debut album Get Lifted won three Grammys thanks to the popular single "Ordinary People." He's performed at the Super Bowl, Grammys, NBA and MLB All-Star Games and Kimye's wedding. After two more solo albums, he released a Grammy-winning collaboration with the Roots, Wake Up!, which he followed with 2013's No. 1 ballad "All Of Me" and album Love IN The Future. Legend, who appeared in 2008's Soul Men, was a coach on the competition series Duets. He wrote an original song for Django Unchained and recently won a Golden Globe with Common for their collaboration for Selma. Dating since 2007, he married model Chrissy Teigen in Italy in September 2013.

Dan MacMedan/WireImage for The Recording Academy