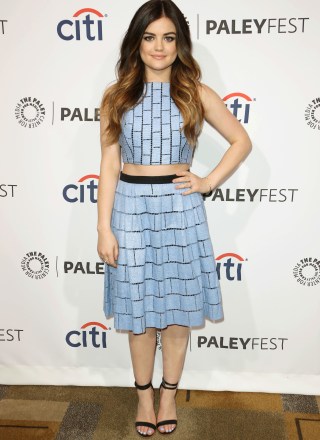 The youngest of three siblings, Lucy Hale began taking voice lessons at 8 and acting lessons soon followed. In 2003, she was one of five winners on the competition show American Juniors. When her singing group dissolved, she pursued acting full time, nabbing bit parts on Nickelodeon's Ned's Declassified School Survival Guide and went on to Drake and Josh, The O.C., Private Practice and How I Met Your Mother. Roles started getting bigger. From 2007-2008, she was the goth girlfriend on Wizards Of Waverly Place and then took the lead in a short-lived reboot of Bionic Woman in 2007 and the CW's Privileged the next year. It wasn't until 2010 that she got her truly big break as Aria on Pretty Little Liars. She has also been in a few films like The Sisterhood of The Travelling Pants and is currently working on a solo album. Previously connected to country singer Joel Crouse, she debuted new British beau, Lawson drummer Adam Pitts, in September 2014.